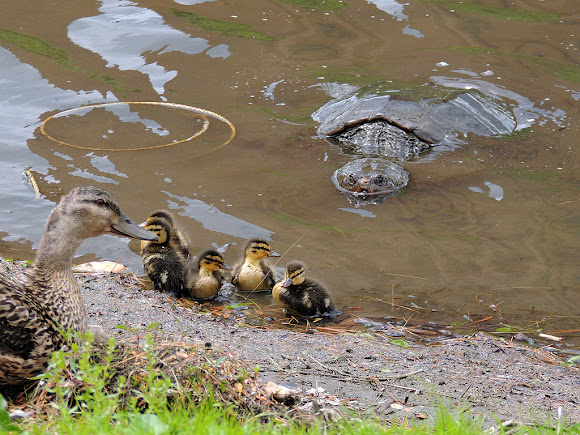 I saw a rather tense bit of drama today. Three large snapping turtles had noticed these little mallard ducklings and one of them made two separate attempts to capture some food. The mother mallard called her babies away from the water both times.

Posting a follow-up to this. It's two months later. I was down at the pond yesterday and saw mama, who managed to keep three of her six ducklings. They are quite large and have well developed adult plumage. Their wings are still too small for flight but they try them out frequently and I'm sure they'll be flying soon. It's a tough life for a duckling, even on a protected pond like this one. I'm surprised that even half the ducklings survived this long.

Lovely! The happy ending (for the baby birds) was nice too...I am sure the turtles found something else for lunch.

My goodness!!!! that turtle looks like he's gonna lunge for those baby ducks!

It was very stressful watching them. I knew if I moved towards the water that the ducks would get nervous and head out into the pond, right into the jaws of the turtle, so I had to trust that mama duck would call her babies away in time. She did, twice, but I'm sure that lots of ducklings fall prey to the snappers every year.