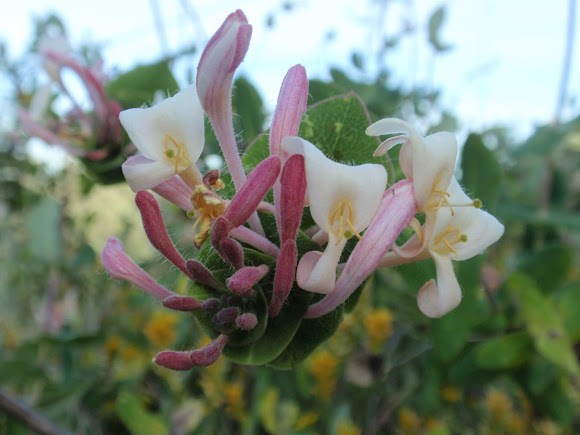 Climbing shrub (1 to 3m tall), evergreen , belongs to the Caprifoliaceae family. It has flexible stems, with abundant and intertwined branches. The leaves are opposite to each other, simple, dark green and bright with the ones close to the inflorescence united at the base almost in the form of a bowl. Tubular flowers initially rosy, but slightly yellow with time. The fruits are red pseudo berries, they are toxic. Distribution: Mediterranean Region, Southwest Asia and the Azores. It is however, cultivated elsewhere as an ornamental plant. In mainland Portugal, is distributed in the Centre and South, and its occurrence in the North is limited to the valleys of the Douro and its tributaries. Flowering: April to August.

Shrublands, clearings and edges of forests and woodlands in Mediterranean environment, often in rocky and stony land. Indifferent to soil composition .