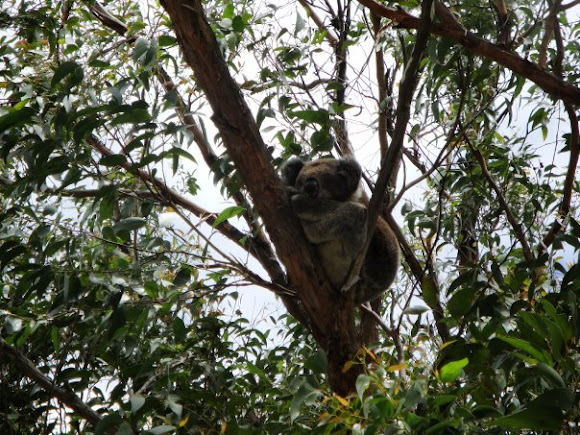 The Koala is one of Australia's best known animals. It is an icon represented when promoting Australia to the tourist industry, and in general people adore these cuddly creatures. There are two species, the Southern Koalas and the Northern Koalas. Koalas are often referred to as a Koala bear. However they are not a bear. The name Koala comes from an Aboriginal word. It means "no drink", as Koalas get enough fluids through the eucalyptis leaves they feed on. Koalas are found all over east Australia, mainly in the south east. The male Koalas are larger than the females. Southern koalas are larger than Northern koalas. They have a grey soft furred coat, with a white chest. A flat nose and big ears, and clawed feet for climbing. They are very placid animals, and do not move around much, they are only active for about 2 hours of the day.

The koala is native to Australia and found in coastal areas of the mainland's eastern and southern regions, inhabiting Queensland, New South Wales, Victoria and South Australia. Koalas typically inhabit open eucalypt woodlands, and the leaves of these trees make up most of their diet. Koalas are listed as of least concern by the International Union for Conservation of Nature. The Australian government lists populations in Queensland and New South Wales as vulnerable. The animal was hunted heavily in the early 20th century for its fur, and large-scale cullings in Queensland resulted in a public outcry that initiated a movement to protect the species. Sanctuaries were established, and translocation efforts moved to new regions koalas whose habitat had become fragmented or reduced. The biggest threat to their existence is habitat destruction caused by agriculture and urbanisation.

Thank you for the kind comment and the reminder, Neil. Brings back a lot of good memories :) The third photo if I remember correctly was a male koala that caught my attention with his mating call which btw sounded more like a donkey to me.
I totally get that it was the happy point of your day. Do you still see koalas in that area?

Awesome spotting, Jae. I particularly love the third photo. I caught a similar sight in Brisbane about 12 months ago, whilst sitting in peak hour traffic. Mum and a big independent joey coming down the tree. The happy point of my day :)