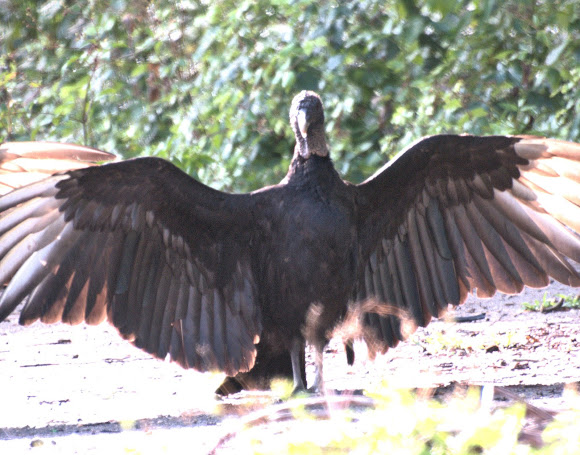 Fairly large bird of prey, measuring 56–74 cm (22–29 in) in length, with a 1.33–1.67 m (52–66 in) wingspan. The extended wing bone measures 38.6–45 cm (15.2–17.7 in), the shortish tail measures 16–21 cm (6.3–8.3 in) and the relatively long tarsus measures 7–8.5 cm (2.8–3.3 in).[26] Its plumage is mainly glossy black. The head and neck are featherless and the skin is dark gray and wrinkled. The iris of the eye is brown and has a single incomplete row of eyelashes on the upper lid and two rows on the lower lid. The legs are grayish white, while the two front toes of the foot are long and have small webs at their bases. The feet are flat, relatively weak, and are poorly adapted to grasping; the talons are also not designed for grasping, as they are relatively blunt. The nostrils are not divided by a septum, but rather are perforate; from the side one can see through the beak.[30] The wings are broad but relatively short. The bases of the primary feathers are white, producing a white patch on the underside of the wing's edge, which is visible in flight. The tail is short and square, barely reaching past the edge of the folded wings.[27] The subspecies differ in size according to Bergmann's Rule, and the amount of white underwing coloration also varies. As it probably forms a cline over its entire range, the species is often considered monotypic.

Wetland and grassy area near a retention pond adjacent to an urban shopping center with several restaurants.