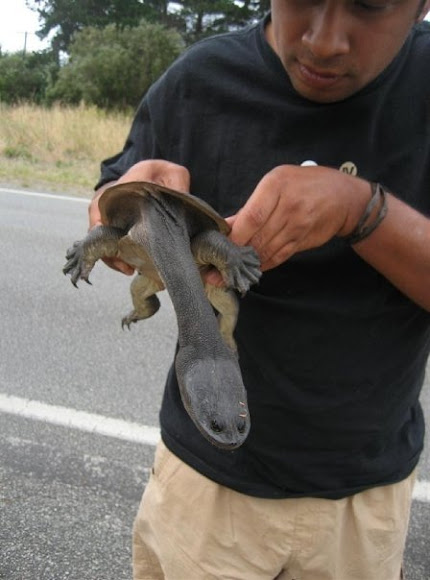 The southwestern snake-necked turtle or narrow-breasted snake-necked turtle is a species of turtle in the Chelidae family. Chelodina colliei is very peculiar long-necked turtle because it is unique in many ways. The species is endemic to the south-west part of Western Australia, and the only member out of the Chelodina and Macrochelodina genera to have well developed neural bones. Their shell is oblong, rather contracted in front, with a broad impression on the middle of the back. The back is olive brown, with irregular anastomosing lines of the shields; beneath reddish-yellow. The marginal plates longer than broad, the second larger than the first and third; and rather angularly produced in the middle of the inner edge, opposite the suture between the first dorsal and first costal plate; the sternum high, flat, strongly and sharply keeled on the sides.

Chelodina colliei is endemic to the southwestern part of Western Australia. It is this species' uniqueness that also makes it more vulnerable for environmental threats. The destruction of this species' natural habitat, many road kills of turtles searching for either a nesting site or a water body that does not dry out in summer, and natural predators are main causes of the Chelodina colliei population's decrease in numbers.

First photo is a female Narrow-breasted snake-necked turtle, the second one shows her clutch of eggs. Spotted at Emu Point, Australia. (sources:see reference)

Thank you for your comment, ChiefRedEarth. I don't know if the long neck helps the turtle accelerate, it could very well be. I think its long neck also comes in handy for hunting.

"Movement: When prey is in range the Oblong turtle can strike its head forward to seize it"
(source: http://www.climatewatch.org.au/species/r...)

WOW! What a rare finding Jae! Does this long neck helps him to accelerate speed?

Thank you for your kind comment, Gilma.
I wish I could monitor those eggs, however these pictures were taken on my trip through Australia, and I'm from Holland myself.

Just awesome!! this turtle is incredible and laying eggs after...amazing. Do you plan to keep an eye on those eggs?

This whole scene here reminds me of a video of a sloth that crossed the road with the help of a human-friend (with inspirational music 'I believe I can fly' playing, of course)! Awesome!

Thank you for your kind comments, James & Sukanya

In West Bengal, India we have an idiom celebrating the fact that once a tortoise or turtle (koch-chhop is generic for both in common lingo) bites it does not let go!! Very brave handling it...great shot.

Kyle A 5 years ago

Great job helping her cross the road. Also, great shot showing why it's called a called a long-necked turtle. Thanks for sharing.

Thank you, Rosa Maria.
This beautiful turtle laid her eggs right after I helped her cross a road.

Awesome finding! We don't get side-necked turtles (Suborder: Pleurodira) in the U.S. :)