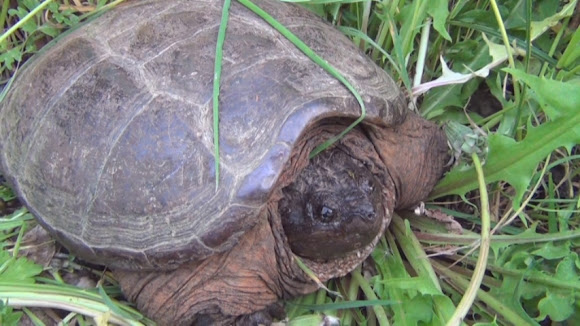 The common snapping turtle (Chelydra serpentina) is a large freshwater turtle of the family Chelydridae. Its natural range extends from southeastern Canada, southwest to the edge of the Rocky Mountains, as far east as Nova Scotia and Florida. This species and the larger alligator snapping turtle are the only two species in this family found in North America (though the common snapping turtle, as its name implies, is much more widespread).[2] Common snappers are noted for their belligerent disposition when out of the water, their powerful beak-like jaws, and their highly mobile head and neck (hence the specific name "serpentina", meaning "snake-like"). In some areas they are hunted very heavily for their meat, a popular ingredient in turtle soup. These turtles have lived for up to 47 years in captivity, while the lifespan of wild individuals is estimated to be around 30 years.

Common habitats are shallow ponds or streams. Some may inhabit brackish environments, such as estuaries. Common snapping turtles sometimes bask—though rarely observed—by floating on the surface with only their carapace exposed, though in the northern parts of their range they will also readily bask on fallen logs in early spring. In shallow waters, common snappers may lie beneath a muddy bottom with only the head exposed, stretching their long necks to the surface for an occasional breath (note that their nostrils are positioned on the very tip of the snout, effectively functioning as snorkels). Snapping turtles are omnivores, consuming both plant and animal matter, and are important aquatic scavengers; but they are also active hunters that prey on anything they can swallow, including many invertebrates, fish, frogs, reptiles (including snakes and smaller turtles), unwary birds, and small mammals. Snappers will travel extensively overland to reach new habitat or to lay eggs. Pollution, habitat destruction, food scarcity, overcrowding and other factors will drive snappers to move overland; it is quite common to find them traveling far from the nearest water source. This species mates from April through November, with their peak laying season in June and July. The female can hold sperm for several seasons, using it as necessary. Females travel over land to find sandy soil in which to lay their eggs, often some distance from the water. After digging a hole, the female typically deposits 25 to 80 eggs each year, guiding them into the nest with her hind feet and covering them with sand for incubation and protection. Incubation time is temperature-dependent, ranging from 9 to 18 weeks. In cooler climates, hatchlings overwinter in the nest. The Common Snapping Turtle is remarkably cold-tolerant; radiotelemetry studies have shown that some individuals do not hibernate, but remain active under the ice during the winter. [6] Although designated as "least concern" on the IUCN redlist, the species has been designated in the Canadian part of its range as "Special Concern" due to its life history being sensitive to disruption by anthropogenic activity.[7]

My wife was out jogging and rescued this snapper as it was crossing the road. She called me and I recorded some sightings while watching it to make sure it remained safe until it was down into the brush away from the highway.