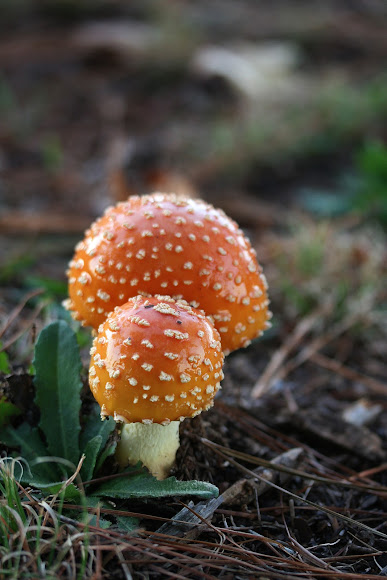 Dark orange, peach, pink, yellow, and blush colored mushrooms with pale orange to white veil remnants on pilei (caps). Pilei are highly variable in color and texture. Gills are cream to white and crowded with occasional short gills. Stipe is white and covered in veil remnants. A large, distinctly sac-like volva transitions into stipe fairly smoothly. Younger specimens still have white veils in tact. Older specimens have skirt-like annuli. Amanita persicina was once grouped in as a variety of Amanita muscaria, but DNA evidence shows A. persicina and A. muscaria as two distinct species.

Growing in a grassy field in a public park in Northwest Georgia (Floyd County), US.

Thank you both, António and Felix!

A perfect and beautiful spotting flowntheloop,congrats on the well deserved SOTD and thanks for sharing

Oh my goodness! Thank you all so much! I'm overwhelmed by the response here. I was so happy to find such beauties this week!

Congratulations it's beautiful series !! I love that

Congratulations flowntheloop, this great series is our Spotting of the Day!

"These distinctive Peach-Colored Fly Agarics (Amanita persicina) are our Spotting of the Day! Found in North America and once considered a variety of the Fly Agaric (Amanita muscaria), Amanita persicina has recently been elevated to species status".
Facebook:
https://www.facebook.com/projectnoah/pho...

Thank you both! I thought they were pretty spectacular!

So very beautiful! The variety in colors is great :)