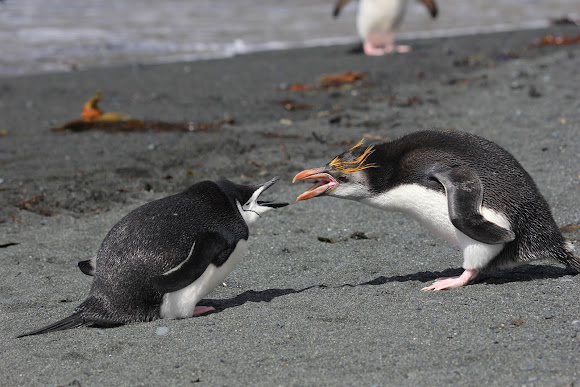 Showing a Chinstrap and Royal Penguin (Eudypdes schlegeli) having a bit of a face off. The spotting is for the Chinstrap as this is a very unusual spotting for this area (see notes). The interaction between the two species is probably just due to grumpiness on the part of the Royal Penguin as there didn't appear to be an issue with territory or any other visible rivalry.

Seen on Maquarie Island in the Australian sub Antarctic. Both penguins were away from any breeding colonies on the beach just above the surf line.

The Royal Penguins have a big breeding colony on Maquarie Island but this is a rare sighting for the Chinstrap at this location. The nearest colony of Chinstraps is about 1500kms away. As to why the Chinstrap is here no one really knows. There have been 5 records of Chinstrap on Maquarie between 2013 and 2017.( Ref: Cate Grant, ABC News.) I dont know if it is just the same bird each year and maybe it just likes the area.

Thank you so much. A great honour.

Thank you Rach and Liana for your comments. Very appreciated.

A belated congratulations on your SOTD Rob! Wonderful recognition of a very funny interaction :D

Congratulations on your SOTD. A very unusual interaction.

Thank you also Danielle, Sarah, Sergio and Tukup for your support and comments.

Thank you so much for the sotd. Both penguin species are quite special for this particular spotting and I am so pleased they got the sotd on World Penguin Day.

Congratulations Triggs. Too bad none of us can read beaks :-) Great series. Thanks.

WONDERFUL spotting!!!
And CONGRATS TO YOU!! :)

Congratulations Robert, your arguing penguins have been chosen as our Spotting of the Day for #WorldPenguinDay! We should be so lucky that you have visited a place as unique as Macquarie Island!

"Today is #WorldPenguinDay! World Penguin Day is celebrated on the 25th April each year as an educational initiative, coinciding with the annual northern migration of the Adélie penguins. Here a Chinstrap Penguin (Pygoscelis antarctica) was spotted having a heated argument with a Royal Penguin (Eudypdes schlegeli) on Macquarie Island. A UNESCO World Heritage Site in the southwest Pacific, Macquarie Island is a breeding home to four species of penguins, including the endemic royal penguin. The chinstrap penguin is a vagrant, well away from breeding colonies and with only a few reported sightings on the island. Historically hunted for their oil, royal penguins have seen their numbers climb back. They are currently listed as Near Threatened by the IUCN, with a high risk of endangerment in the wild.
Find out more about royal penguins from the Australian Antarctic Division: https://buff.ly/2vlMigX "

Thank you for the comment Mark. I know a few aussie birders that get down there as I believe it is the only place on Australian territory that redpoll can be found. Although how a tiny introduced to NZ finch has found itself there, I have no idea.

Not another argument ! That's amazing about the Chinstrap visit. It seems the Southern Ocean stirs up many surprises.

I would love to visit Macquarie... one day.

Thank you Hema, Neil and Liana for your comments. Maquarie is a very special place with an amazing story and its recent history is testament to what can be achieved to redress the balance of nature. The geology is just amazing and did I mention the geology?! :)

Fantastic spotting Rob! I'm with Neil, definitely want to go there. Thank you for sharing :)