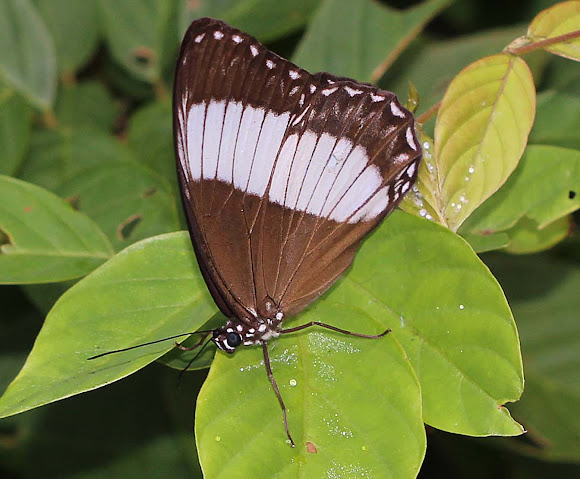 Nymphalidae; Satyrinae; Zethera pimplea pimplea Erichson 1834. Quotation from Philippine Lepidoptera: "The SATYRINAE, the satyrines or satyrids, commonly known as the browns, are a subfamily of the Nymphalidae (brush-footed butterflies). They are generally weak fliers and often shun bright sunlight, preferring moist and semishaded habitats. The caterpillars feed chiefly on monocotyledonous plants such as palms, grasses, and bamboos."

I spotted these Wallaceans in a sparsely populated area on roadside foliage at a point where a stream passes under the road and discharges into an area of mangrove, just 50 metres away. They were actively fluttering around, landing on low tree branches and and tall plants. Much of their activity was at about eye level. I think that these 5 pictures show only 2 specimens, but I jotted down that there were approximately 8 or 9 flying around at that time. I was there watching them (and other species) from 9:00 to 9:30 a.m., but I know from subsequent visits that they come out and flutter around in this way starting at about 6:00 a.m.