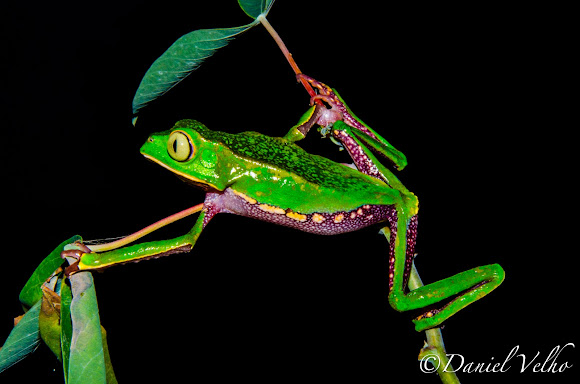 Phyllomedusa vaillantii is a medium size frog the exhibits sexual dimorphism. Males have snouts that appear angular from above and nearly truncate. In females, the snout appears rounded from above and inclined anteroventrally. Snout-vent lengths range from 50.2 - 57.5 mm in males and 68.8 - 81.2 mm in females (but see Lima et al. 2005, which states male SVL is 58 - 65 mm and females are 74 - 83 mm). Its elevated parotid glands are angular and extend to the sacrum, displayed with longitudinal row of white granules along the edge of the gland. The first finger is opposable and shorter the second. Conversely, the first toe is opposable and longer to the second. There are moderately large discs on fingers and toes. The forearm of this species is slender. Dorsal skin is rough, particularly tubercular on the hind limbs of its adult frogs (Duellman 1974). Phyllomedusa tarsius and Phyllomedusa bicolor are similar to Phyllomedusa vaillantii. However, Phyllomedusa tarsius differs by its orange-red iris with a network of black reticulations. Phyllomedusa bicolor differs by its light brown fingers with green adhesive discs (Lima et al. 2005). In life, the dorsal skin and sides of head are green. The flanks viewed from above are colored green, whereas the flanks from below are colored reddish brown; this change in color is separated by a row of longitudinal, oval cream to pale orange spots. The front and back surfaces of the thighs range from reddish brown to lavender with small spots of cream to pale orange. The ventral skin is pale grayish-orange with gray reticulations present in smaller members of the species and dull grayish brown reticulations in larger ones. Throat is decorated with two lavender cream spots. A large pale green spot surrounded by cream coloration can be observed on the chest. The lower lip is cream color. The iris is pale gray with a greenish hue. The eyelids are clear (Duellman 1974).

Phyllomedusa vaillantii is an Amazonian species that can be found in parts of Guyana, French Guiana, Venezuela, Brazil, Colombia, Ecuador, and Peru, and northern Bolivia (Duellman 1974; Lima et al. 2005). This species occurs throughout the Reserva Florestal Adolpho Ducke in Brazil, where it is most commonly found in larger ponds with stream connections (Lima et al. 2005).

Incredible ..a juggler without hind legs! A winner Daniel Love it !!