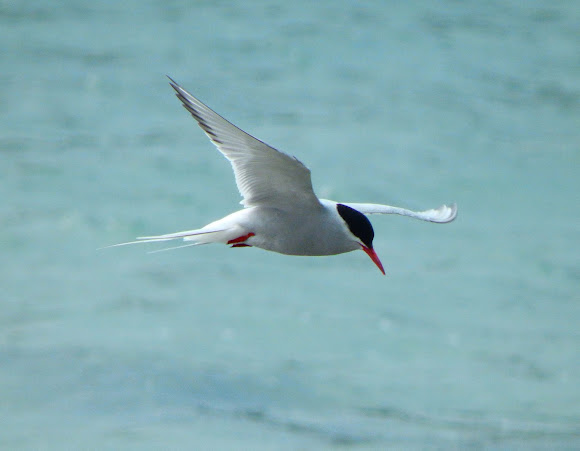 This bird has a circumpolar breeding distribution covering the Arctic and sub-Arctic regions of Europe, Asia, and North America (as far south as Brittany and Massachusetts). The species is strongly migratory, seeing two summers each year as it migrates from its northern breeding grounds along a winding route to the oceans around Antarctica and back, a round trip of about 70,900 km (c. 44,300 miles) each year. Arctic Terns are medium-sized birds. They have a length of 33–39 cm (13–15 in) and a wingspan of 76–85 cm (26–30 in). They are mainly grey and white plumaged, with a red beak (as long as the head, straight, with pronounced gonys) and feet, white forehead, a black nape and crown (streaked white), and white cheeks. The grey mantle is 305 mm, and the scapulae are fringed brown, some tipped white. The upper wing is grey with a white leading edge, and the collar is completely white, as is the rump. The deeply forked tail is whitish, with grey outer webs. The hindcrown to the ear-coverts is black.

Seen in Lerwick but also in all other Shetland Islands. Is common there.