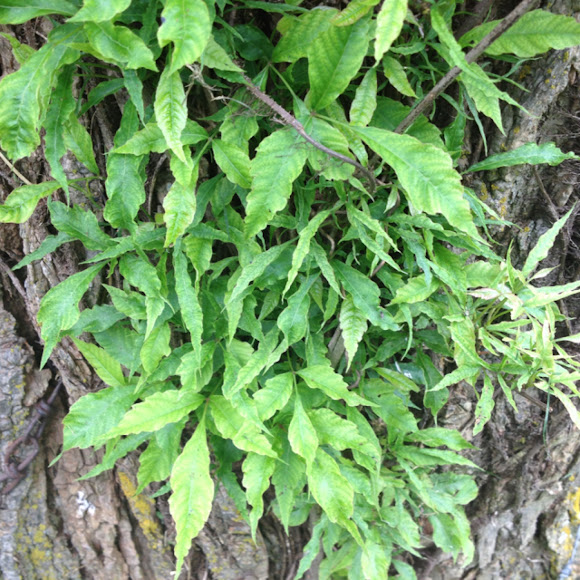 Pulled from Wiki: "Toxicodendron radicans, commonly known as poison ivy (older synonyms are Rhus toxicodendron and Rhus radicans), is a poisonous North American plant that is well known for its production of urushiol, a clear liquid compound found within the sap of the plant that causes an itching, irritation and sometimes painful rash in most people who touch it. The plant is not a true ivy (Hedera)." Poison ivy can be found growing in any of the following forms: as a trailing vine that is 10–25 centimetres (3.9–9.8 in) tall as a shrub up to 1.2 metres (3 ft 11 in) tall as a climbing vine that grows on trees or some other support

Pulled from wiki: "Poison ivy grows throughout much of North America, including the Canadian Maritime provinces, Quebec, Ontario, Manitoba, and all U.S. states east of the Rocky Mountains, as well as in the mountainous areas of Mexico up to around 1,500 m (4,900 ft) (caquistle or caxuistle is the Nahuatl term[clarification needed] ). It is normally found in wooded areas, especially along edge areas where the tree line breaks and allows sunshine to filter through. It also grows in exposed rocky areas, open fields and disturbed areas. It may grow as a forest understory plant, although it is only somewhat shade tolerant. The plant is extremely common in suburban and exurban areas of New England, the Mid-Atlantic, and southeastern United States. Similar species, poison oak, and Toxicodendron rydbergii are found in western North America. Poison ivy rarely grows at altitudes above 1,500 m (4,900 ft), although the altitude limit varies in different locations. The plants can grow as a shrub up to about 1.2 metres (3.9 ft) tall, as a groundcover 10–25 cm (3.9–9.8 in) high, or as a climbing vine on various supports. Older vines on substantial supports send out lateral branches that may be mistaken for tree limbs at first glance. It grows in a wide variety of soil types, and soil pH from 6.0 (acidic) to 7.9 (moderately alkaline). It is not particularly sensitive to soil moisture, although it does not grow in desert or arid conditions. It can grow in areas subject to seasonal flooding or brackish water. It is more common now than when Europeans first arrived in North America. The development of real estate adjacent to wild, undeveloped land has engendered "edge effects," enabling poison ivy to form vast, lush colonies in these areas. It is listed as a noxious weed in the U.S. states of Minnesota and Michigan, and the Canadian province of Ontario. Outside North America, poison ivy is also found in the temperate parts of Asia, in Japan, Taiwan, the Russian islands of Sakhalin and the Kuriles, and in parts of China. A study by researchers at the University of Georgia found that poison ivy is particularly sensitive to CO2 levels, greatly benefiting from higher CO2 in the atmosphere. Poison ivy's growth and potency has already doubled since the 1960s, and it could double again once CO2 levels reach 560 ppm."

Don't touch!!!! Unless you're immune.