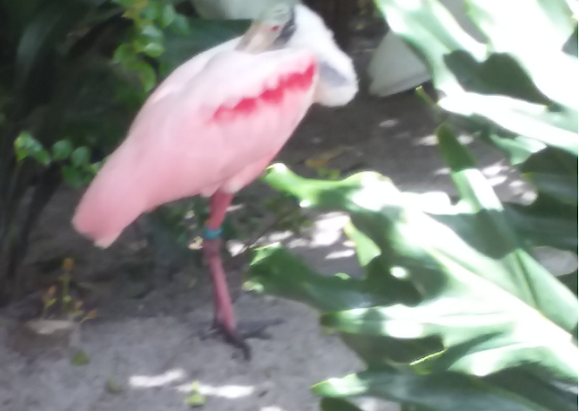 Here's an interesting one. Flanked by some American white ibis, this roseatte spoonbill was resting in the brush near Cocoa Beach. If you'll notice, it has a band on its leg. Since 2003, the Audubon Society has banded about 3,000 chicks and has had more than 1,600 re-sighting reports. In 2013 they also banded chicks from St. Augustine's Alligator Farm. I'm not too sure if that's where this bird came from, but it's an interesting parallel. The roseatte spoonbill was nearly driven extinct in Florida due to the plume trade. Today it's used as an indicator species of Everglades restoration efforts. It's a very unique looking bird, with its scaly head, piercing red eyes, and bright pink plummage, it's easy to identify. Here's hoping that we see more wild spoonbills in Florida's future.

It is a resident breeder in South America mostly east of the Andes, and in coastal regions of the Caribbean, Central America, Mexico, the Gulf Coast of the United States, and from central Florida's Atlantic coast at Merritt Island National Wildlife Refuge, adjoined with NASA Kennedy Space Center at least as far north as South Carolina's Myrtle Beach.