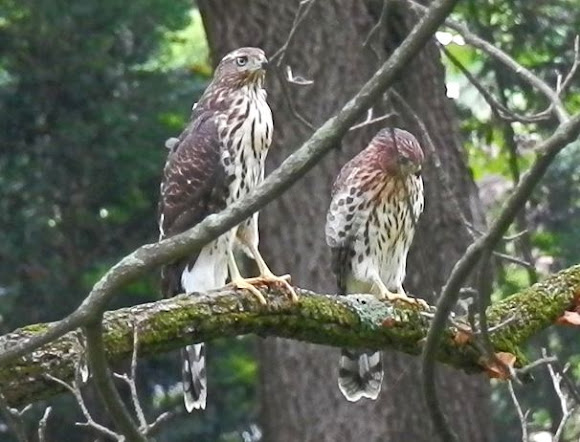 Two of the three young Cooper's Hawks that moved into the area a few weeks ago. Their eyes will turn red as they become adults.The third sits on a branch in the next tree. I am not sure if the same two always sit near each other, but I have noticed that the three of them tend to configure themselves in such a way (a third separated from the two).

This spotting is in a suburban backyard. Our yard is a fairly large one (an acre) and is decidedly not manicured housing several mature trees, brush and bramble (and apparently a hidden-to-me water source judging from the toad and mosquito population) making the area rather wild-life friendly. These guys feast on the smaller birds and squirrels (one assumes other small animals, as well) which he had plenty of (note the past tense!)