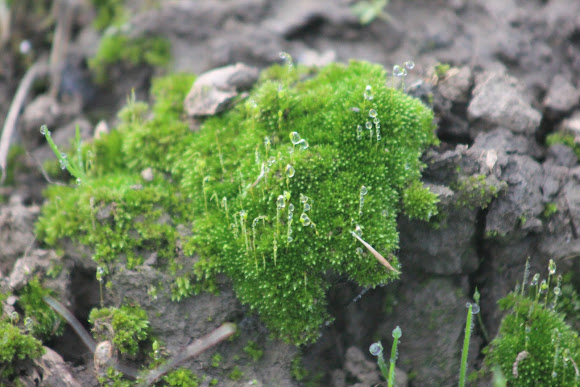 Mosses are flowerless plants belonging to the division Bryophyta. They are typically 1–10 cm (0.4–3.9 in) tall, though some species are much larger, like Dawsonia, the tallest moss in the world which can grow to 50 cm (20 in) in height. They commonly grow close together in clumps or mats in damp or shady locations. They do not have flowers or seeds or vascular tissue and their simple leaves cover the thin stems. At certain times mosses produce spore capsules which are borne aloft on thin stalks. There are approximately 12,000 species of moss classified in the Bryophyta. The division Bryophyta formerly included not only mosses, but also liverworts and hornworts. These other two groups of bryophytes are now placed in their own divisions.

Spotted by a stud ent at Prof. Reynaldo dos Santos