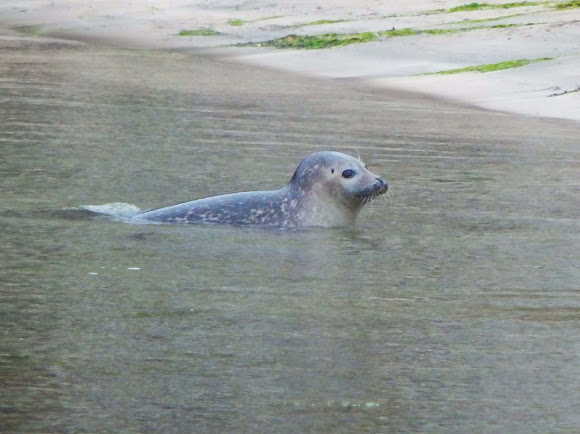 Harbor seals are brown, tan, or gray, with distinctive V-shaped nostrils. An adult can attain a length of 1.85 meters (6.1 ft) and a mass of 132 kilograms (290 lb). Females outlive males (30–35 years versus 20–25 years).ndividual harbor seals possess a unique pattern of spots, either dark on a light background or light on a dark. They vary in color from brownish black to tan or grey; underparts are generally lighter. The body and flippers are short, heads are rounded. Nostrils appear distinctively V-shaped. As with other true seals, there is no pinna (ear flap).

Is a true seal found along temperate and Arctic marine coastlines of the Northern Hemisphere. The most widely distributed of pinniped (walruses, eared seals, and true seals), they are found in coastal waters of the northern Atlantic and Pacific oceans, the Baltic and North Seas.

It was not sunny the days we saw seals so they never really came out of the water. but it was fun to see this pair playing with each other in the water near the beach.

Thanks, Maite! they are usuals in Scotland. They like cold waters :-)

Yes! I should also go back to Portugal some time in the future..there are so many nice places to see and nature :-)

it looks like fun, one day i will travel the world too! :D

Thanks, Madalena! they were two and playing with each other. It was fun to watch them, although they never completely came out of the water.