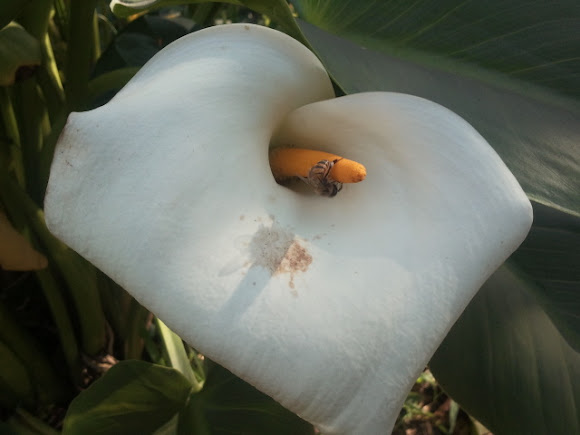 Generally, Apis mellifera are red/brown with black bands and orange yellow rings on abdomen. They have hair on thorax and less hair on abdomen. They also have a pollen basket on their hind legs. Honeybee legs are mostly dark brown/black. There are two castes of females, sterile workers are smaller (adults 10-15 mm long), fertile queens are larger (18-20 mm). Males, called drones, are 15-17 mm long at maturity. Though smaller, workers have longer wings than drones. Both castes of females have a stinger that is formed from modified ovipositor structures. In workers, the sting is barbed, and tears away from the body when used. In both castes, the stinger is supplied with venom from glands in the abdomen. Males have much larger eyes than females, probably to help locate flying queens during mating flights. There are currently 26 recognized subspecies of Apis mellifera, with differences based on differences in morphology and molecular characteristics. The differences among the subspecies is usually discussed in terms of their agricultural output in particular environmental conditions. Some subspecies have the ability to tolerate warmer or colder climates. Subspecies may also vary in their defensive behavior, tongue length, wingspan, and coloration. Abdominal banding patterns also differ - some darker and some with more of a mix between darker and lighter banding patterns.

African honeybees prefer habitats that have an abundant supply of suitable flowering plants, such as meadows, open wooded areas, and gardens. They can survive in grasslands, deserts, and wetlands if there is sufficient water, food, and shelter. They need cavities (e.g. in hollow trees) to nest in. Habitat Regions: temperate, tropical, terrestrial Terrestrial Biomes: desert or dune savanna or grassland, chaparral, forest Wetlands; swamp Other Habitat Features; urban, suburban, agricultural

Spotted by a stud ent at Sci-Enza University of Pretoria