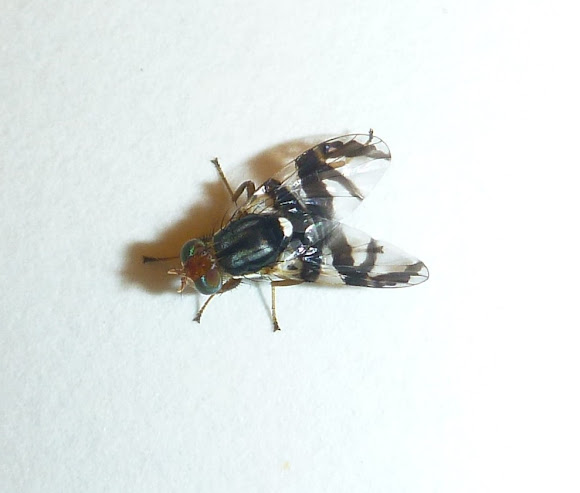 SPIDER OR FLY? This little Tephritid fruit fly of just 5 mm imitates a Jumping Spider (Salticidae)! It lands face down so that the wing pattern, with an imitation of a Jumping Spider's legs, are prominent and threatening. From a small to large distance, the effect is stunning! The last picture is a silhouette which shows mainly the outline of the "spider". This fly is a male, with 3 white bands on the abdomen (instead of the 4 bands in females). This fly also has green eyes instead of the red usually reported for the Apple Maggot. This may be of the original "Hawthorne Fruit Fly" stock. Maybe?

When I first saw it I thought Oh Great, a new Jumping Spider to photograph! It has an erratic movement also that increases it's Jumping Spider Aspect. This little fly has turned out to be a pest species of fruit, especially apples and it's common name is the Apple Maggot. Interestingly, Wikipedia mentions the adult mimicry of Salticid spiders, saying "It uses batesian mimicry as a method of defense - its wing coloration resembles that of the forelegs and pedipalps of a jumping spider (family Salticidae)". Also really, really interesting is the information on the development of sympatric speciation in both the fly and it's hymenopteran parasites: "Rhagoletis pomonella is significant evolutionarily in that the race of this species that feeds on apples spontaneously emerged from the hawthorn feeding race in the 1800 - 1850, the time frame after apples were introduced into North America. The apple feeding race does not now normally feed on hawthorns and the hawthorn feeding race does not now normally feed on apples. This constitutes a possible example of an early step towards the emergence of a new species, a case of sympatric speciation. The emergence of the apple race of Rhagoletis pomonella also appears to have driven formation of new races among its parasites." Fascinating!

Thank you so much Leanne :)

Yes, you are right Agnes, thank you so much....

I was also looking at the green eye-coloring and thought this was the Cherry Fruit Fly (Rhagoletis indifferens), but the wing pattern matches that of the Apple Maggot Fly's, and then saw this fact sheet featuring wing patterns comparison between 3 similar-looking Rhagoletis spp.. This confirmed that it is R. pomenella - http://extension.usu.edu/files/publicati... :) :)

So interesting! And you photographed it so well, to let us see from several angles and in different kinds of light ... clever girl.

Amazing that something so tiny can have so many interesting aspects!!!

Agnes, P.S. We have LOTS of fruit trees in the San Cristobal Valley, especially plums, peaches, pear-apples and apples. Happy place for this fly!

Wow Agnes! Thank you! I never thought to look in the Tephritids to see if this was a known pest. I love all the information and thank you for your investigation.

This awesome spider-mimic fly is considered an exotic pest - http://www.acgov.org/cda/awm/resources/e...

Thank you sunnyjose :) hg williams :) and Frederic :) I was shocked when I saw that it wasn't a spider (it was nighttime at a light) and it was very convincing. Against most backgrounds, the clear part of the wing doesn't show at all.

Nice, happy to discover it!

this is incredible amazing spotting

Wow!!! This is wonderful spotting... Never heard or seen this one..

Thank you Rieko, no, no biting, just prancing :)

Thank you Adarsha :) It is really peculiar! But must be effective.

Thank you ForestDragon.....I don't know of any other mimicry like this one.