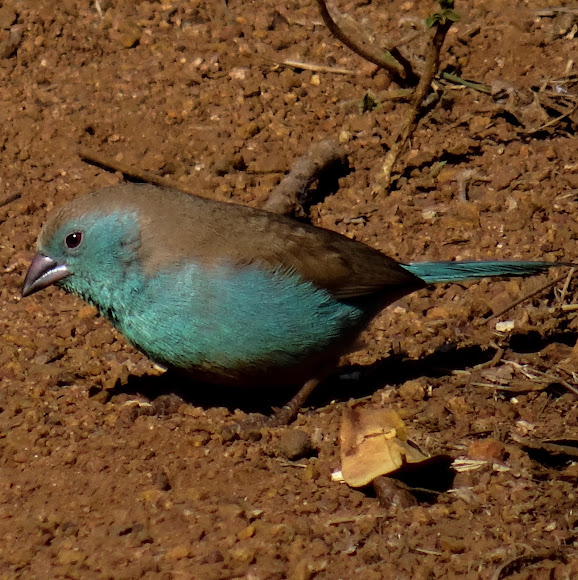 Spotted at Mbuluzi Game Reserve, Swaziland. Usually form pairs which join in small flocks. The Blue Waxbill does not roost in nests at night unless they are incubating eggs or brooding young. Instead, they tend to sleep (and rest) "clumped" next to their mate on perches. They tend to only allo-preen their own mate, but may accept allo-preening from other small estrildids such as the Goldbreasted waxbill. The Blue Waxbill drink by sucking up water. Waxbills belong to a family of birds known as the Estrildidae, commonly known as the estrildid finches, which numbers around 128 species in 27 genera. Besides the waxbills, the family includes the firefinches and mannikins of Africa; the grassfinches and firetails of Australia; and the munias, avadavats and parrot-finches of Asia. Species range in size from being a little smaller than a House Sparrow (Passer domesticus) to being more diminutive than the Goldcrest (Regulus regulus) and occur naturally only in the Old World (i.e. Africa and east through Arabia and India to southern China, southeastern Asia, Australasia and many of the Pacific islands).

Thank you all for your words. A little more information about this is that I have found a lot of guides in "how to keep and breed" this bird. It seems like bird a bit more challenging than other finches...

Tiz, I love your spottings :) beautiful!!