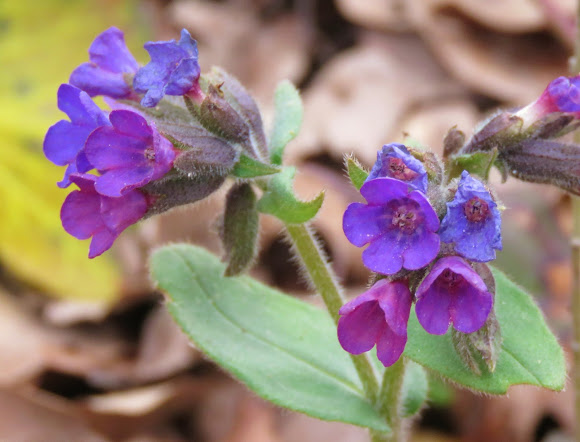 This was my first Lungwort (a.k.a. Mary's tears or Our Lady's milk drops) of this season, a nice surprise. This is an upright herbaceous plant of some 30 cm in height, with a groups of pinkish flowers in terminal group. Flowers are five-petaled, and red-pink in the beginning, turning blue or purple blue as they mature.

This is a very common plant in our counties. Here, found on forest floor of lowland broadleaved forest, Geneva lake valley. It used to be an interesting forest but became very dirty lately. This week I also saw that there is a lot of felled trees inside as well, plenty, and I don't know why. The forest borders a golf terrain, CERN buildings and compounds, and a town.

An interesting medicinal plant - in many cultures and countries, it was used in traditional medicine as a remedy for lung problems; however this property is still not documented enough. However, like many of members of borage family (Boraginaceae), it is edible - young leaves can be eaten raw, as a salade; or cooked and used instead of spinach or nettle leaves. Moreover, I'm almost sure its flowers can also be used in salade - but, having never tried myself cana't be 100% sure, especially as I'm unable to confirm this through literature...