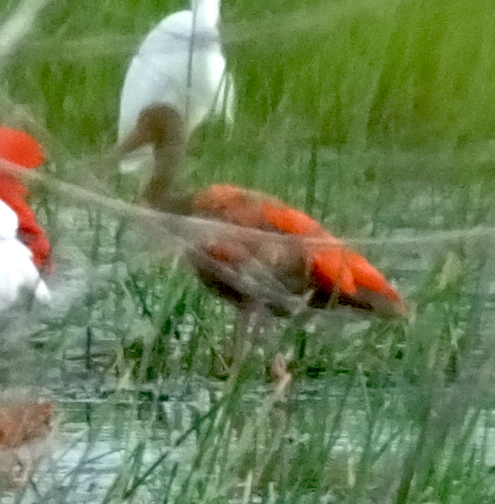 A juvenile scarlet ibis is a mix of grey, brown, and white. As it grows, a heavy diet of red crustaceans produces the scarlet coloration. The color change begins with the juvenile's second moult, around the time it begins to fly: the change starts on the back and spreads gradually across the body while increasing in intensity over a period of about two years. The scarlet ibis is the only shorebird with red coloration in the world. Adult plumage is virtually all scarlet. The feathers may show various tints and shades, but only the tips of their wings deviate from their namesake color. A small but reliable marking, these wingtips are a rich inky black (or occasionally dark blue) and are found only on the longest primaries otherwise the birds' coloration is "a vivid orange-red, almost luminous in quality. Scarlet ibises have red bills and feet however the bill is sometimes blackish, especially toward the end. They have a long, narrow, decurved bill. Their legs and neck are long and extended in flight. Adults are 55–63 centimetres long, and the males, slightly larger than females, typically weigh about 1.4 kilograms. Their bills are also on average around 22% longer than those of females. The life span of the scarlet ibis is approximately sixteen years in the wild and twenty years in captivity. An adult scarlet ibis has a wingspan of around 54 centimetres. Though it spends most of its time on foot or wading through water, the bird is a very strong flyer, they are highly migratory and easily capable of long-distance flight. They move as flocks in a classic V formation. They do eat much shrimp and other similar fare like small crabs, mollusks and other crustaceans.The large quantity of shrimp and other red shellfish produces a surfeit of astaxanthin, a carotenoid which is the key component of the birds' red pigmentation. When kept in zoos, the birds' diet often contains beetroot and carrot supplement to maintain color vibrancy in their plumage.

These were spotted on our way to Morrocoy National park. Venezuela. It was low tide and we spotted these through the bushes feeding. ----- The range of the scarlet ibis is very large, and colonies are found throughout vast areas of South America and the Caribbean islands. Native flocks exist in Brazil; Colombia; French Guiana; Guyana; Suriname; and Venezuela, as well as the islands of the Netherlands Antilles, and Trinidad and Tobago. Flocks gather in wetlands and other marshy habitats, including mud flats, shoreline and rainforest. There is an outlying colony in the Santos-Cubatão mangroves of Baixada Santista district in southeastern Brazil, which is considered critically endangered. The highest concentrations are found in the Llanos region between western Venezuela and eastern Colombia. The fertile and remote tropical grassland plain of the Llanos provides a safe haven far from human encroachment. Together with its relative the bare-faced ibis, the scarlet ibis is remarkably prolific and conspicuous in the region. Scarlet ibis vagrants have been identified in Belize, Ecuador, and Panama; Aruba, Cuba, Dominica, Grenada, and Jamaica; sightings have even been made in the United States. The species may well have been a natural vagrant to the Gulf Coast in the 19th century or earlier – in The Birds of America, John James Audubon made brief remarks regarding three rubra specimens he encountered in Louisiana. However, virtually all modern occurrences of the species in North America have been introduced or escaped birds. In one notable example from 1962, scarlet ibis eggs were placed in white ibis nests in Florida's Greynolds Park, and the resulting population hybridised easily, producing "pink ibises" that are still occasionally seen.

Gorgeous, gorgeous birds. Only afterwards did I notice that this one had different colours. This was the beginning of a very good spotting day. Check other spottings!