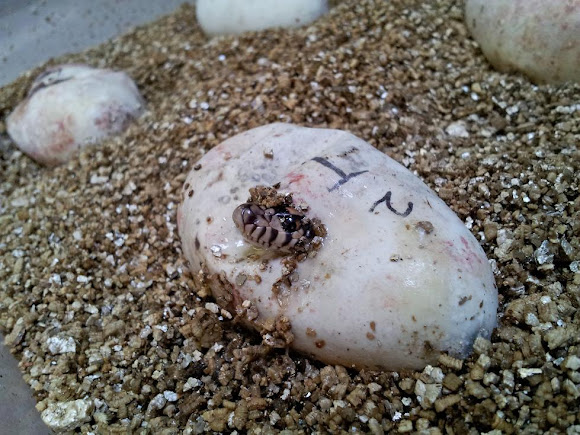 The Louisiana pine snake, is a species of large, nonvenomous constrictor of the family Colubridae. This powerful snake is notable because of its large eggs and small clutch sizes. The Louisiana pine snake is indigenous to west-central Louisiana and eastern Texas, where it relies strongly on Baird's pocket gopher for its burrow system and as a food source. The Louisiana pine snake is rarely seen in the wild and is considered to be one of the rarest snakes in North America. The demise of the species is due to its low fecundity coupled with the extensive loss of suitable habitat - the Longleaf Pine savannas in the Gulf coastal plain of the southeastern United States. Management activities are being conducted to promote the species' recovery. (information from Wikipedia)

This spotting took place at Tulsa Zoo, and here is the text from their 7/30/13 media release:

After a four-year effort to breed one of the rarest vertebrates in North America, the Tulsa Zoo welcomed four healthy Louisiana pine snake hatchlings.

Of the seven eggs laid on May 10, two were infertile, one died early on, and the remaining four were artificially incubated. The first hatchling pipped, or cut through its shell, on July 8, after a 60-day incubation period. The remaining three were out of their eggs by July 13.

The zoo’s breeding efforts are part of the Species Survival Plan® (SSP), a collaborative program of the Association of Zoos & Aquariums (AZA) to manage threatened and endangered species. The breeding pair consists of a 12-year-old male received from the Sedgwick County Zoo in 2008 and an 11-year-old female received in 2009 from the Roger Williams Park Zoo.

Originally calling nine Louisiana parishes and 14 Texas counties home, this snake now is found in only four parishes and is believed by some to have vanished from Texas as of early 2013. The Louisiana Pine Snake is state classified as “threatened” in Texas, protected from direct harm and unauthorized collection, and as “imperiled-to-vulnerable” in Louisiana. The primary threat has been habitat degradation.

Thank you all for the wonderful and encouraging comments. I would gladly trade SOTD for more hatchlings! :-D

Amazing! Congratulations on both S.O.T.D. and the hatching of these lovely snakes!

Wow! Congrats on a great spotting! :)

Congratulations Aaron, great story and information and also so sad for it's closeness to extinction.

Congratulations Aaron on your SOTD

Thanks for sharing this wonderful spotting with us Aaron. Same everywhere -"loss or degradation of habitat" ....so sad. Anyhow, it's good to hear about breeding projects. Hopefully someday they'll find a secure home in the wild.

Thank you all for the kind words and also for the honor, Yasser. We are extremely pleased with the way this breeding project turned out. Hopefully we can continue to do our part to make sure this species hangs on in the wild.

Aaron, what an awesome story and accomplishment! These rare hatchlings have earned spotting of the day honors. Congratulations to you and the Tulsa Zoo!

Fantastic accomplishment! Congrats Aaron and the rest of the Tulsa Zoo staff for accomplishing this wonderful miracle.