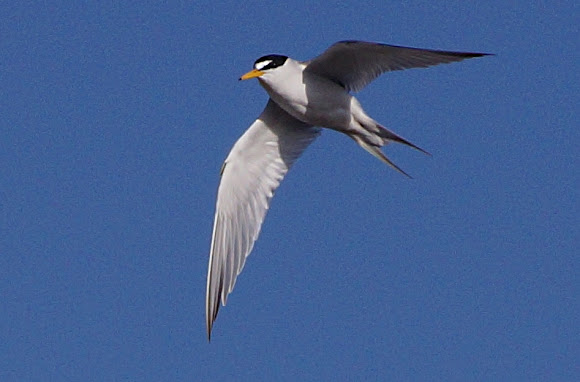 Life inside a colony. This spot is one of largest producing colonies in California. More then 300 birds in the 9 acre colony. The 4ft high fence was placed to not only to keep mammals and reptiles out but to keep the chicks in, using a vinyl mesh chick fencing along the bottom. These are the smallest tern species in the North America. They have coloring of most gulls, gray and white. The black cap and white forehead is one of the other identifiers. The leading edge of the wings are black. The long orange bill with most having a black tip. They also have short legs.
They are fast fliers and when they come into the colony they have to find their mate and nest. Not always do they get it right. When they see their target they will literally drop out of the sky.
Image 2 Is a nesting tern.
Image 3 is a male feeding a female. .
Image 4 Is the male and female swapping. They do swap and take turns on the nest occasionally. If you look under the right bird you will see the first chick spotted this year in the colony.
Image 5 is what happens when a gull tries to hunt inside the colony.
So far the threats have been nearby nesting Western Gulls, California Gulls, Peregrine Falcon, Red-tailed Hawks, Crows and Ravens. The latter have already taken some of the eggs. There was Red Fox spotted nearby which was captured and removed from the area.

Along the coast and nesting on a tarmac.

Funny part is during courtship the male will bring the female a fish. As he mounts her he will wave the fish back and forth over her head. After they are done the female will eat the fish.

Thank you bg11a1 and Kathleen.

Nice spotting and interesting information. Thanks for sharing it!