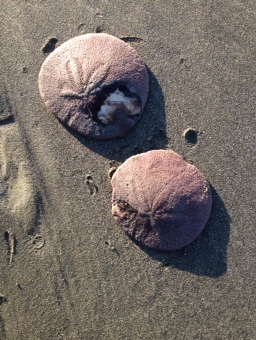 These are still alive and have little purple`-ish hairs thats move about when you look closely. Put them back in the water or where the tide will get them back in. Only collect pure white ones with no hairs or color. As you can see the one on top has been damaged and you can see the "skeleton" or "Test" underneath. Not Edible. Lifestyle and habitat Sand dollars live beyond the mean low water line on top of or just beneath the surface of sandy or muddy areas. The spines on the somewhat flattened underside of the animal allow it to burrow or to slowly creep through the sediment. Fine, hair-like cilia cover the tiny spines. Podia line the food grooves that move food to the mouth opening, which is in the center of the star-shaped grooves on the underside of the animal (called the oral surface). Its food consists of crustacean larvae, small copepods, diatoms, algae and detritus.[4] On the ocean bottom, sand dollars are frequently found together. This is due in part to their preference for soft bottom areas, which are convenient for their reproduction. The sexes are separate and, as with most echinoids, gametes are released into the water column and are conceived by external fertilization. The nektonic larvae metamorphose through several stages before the skeleton or test begins to form, at which point they become benthic. In 2008, biologists learned that sand dollar larvae clone themselves as a mechanism of self-defense. Cloning is an asexual reproductive mechanism, where the cost is borne by the larva both in resources as well as in development time. Larvae have been observed to undergo this process when food is plentiful or temperature conditions are optimal. It has also been suggested that cloning may occur to make use of the tissues that are normally lost during metamorphosis. Recent research has shown that the larvae of some sand dollars clone themselves when they detect predators (by sensing dissolved fish mucus). Larvae exposed to mucus from predatory fish respond to the threat by cloning themselves, thus doubling their numbers while effectively halving their size. The smaller larvae are better able to escape detection by fish, but may be more vulnerable to predation by smaller animals, such as pelagic and planktonic larval stages of crustaceans.[5][6] Sand dollars in their mature form have few natural predators, though ocean pouts and sunflower starfish are known to eat them on occasion.[7] Evolution The ancestors of sand dollars diverged from the other irregular echinoids, namely the cassiduloids, during the early Jurassic,[8] with the first true sand dollar genus, Togocyamus, arising during the Paleocene. Soon after Togocyamus, more modern-looking groups emerged during the Eocene.[1

Hello Tera2 and Welcome to the Project Noah community!
We hope you like the website as much as we do. There are many aspects to the site and community. The best way to get started is to read the FAQs at http://www.projectnoah.org/faq where you can find all the tips, advice and "rules" of Project Noah. You, like the rest of the community, will be able to suggest IDs for species that you know (but that have not been identified), and make useful or encouraging comments on other users' spottings (and they on yours).
There are also "missions" you can join and add spottings to. See http://www.projectnoah.org/missions . A mission you should join is the http://www.projectnoah.org/missions/2165... to chose the best wild photo of 2018,only the spottings added to that mission are eligible.Note that most missions are "local". Be sure not to add a spotting to a mission that was outside of mission boundaries or theme :) Each mission has a map you may consult showing its range. We also maintain a blog archive http://blog.projectnoah.org/ where we have posted previous articles from specialists from different geographical areas and categories of spottings, as well as wildlife "adventures".
So enjoy yourself, share, communicate, learn. See you around :)