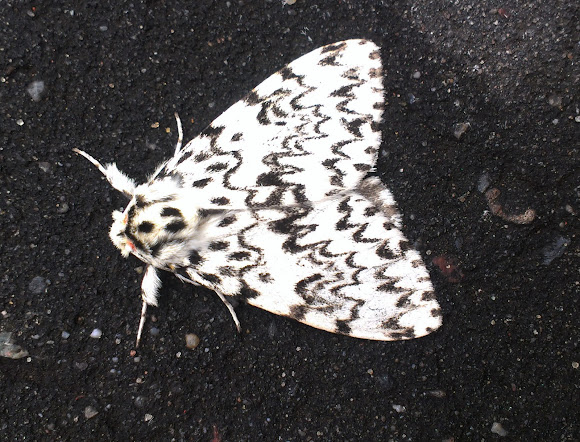 A very distinctive and attractive moth, easily recognised by the black wavy pattern against the white background. The abdomen is coloured with pink and white bands. This individual was a male, which is smaller than the female and has large, feathery antennae (I saw them, couldn't get a photo). The larvae feed on oak and pine, the adults are seen on the wing between July and September. They're usually nocturnal. Wingspan between 3 and 5 cm.

Found throughout the south of England, usually in woodland, parks or gardens. I found this one sitting on the asphalt just outside my flat. There is a wooded area nearby.

Almost stepped on this guy! It was raining, I wonder if he got knocked out of the air. I picked him up and he flew off after I took these photos.

Thanks, he's very striking! I thought of dominoes when I saw him haha :D

Reminds me of dice...