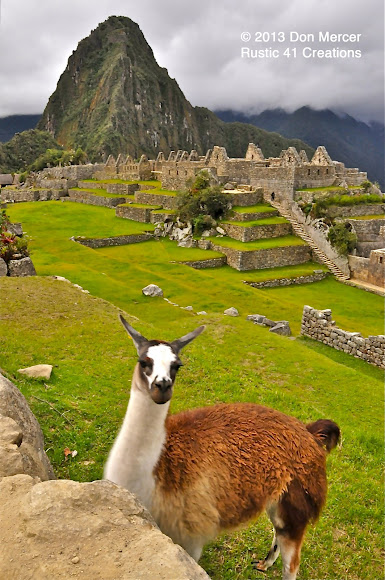 This animal is one in a small herd that range freely in Machu Picchu National Park, Peru. While most llamas are, today, considered to be domesticated, given its temperament, I imagine this one might have some opposition to being harnessed. It was surprisingly skittish when approached by other park visitors who, for some reason, seemed oblivious to the animal's state of mind.

While this animal and a couple others seen at Machu Picchu are in an ongoing close proximity to visitors who frequent the national park in some numbers, this animal was a bit temperamental and appeared to become agitated when approached by a couple other folks. As an aside, my vote for the greatest politician of all time goes to the person who stood above what is now the ancient ruins of Machu Picchu and had both the vision to create this magnificent site, as well as the persuasive powers to inspire a people to construct a city in such stark terrain at an altitude of nearly 8,000 feet above sea level. Having visited Chichen Itza in Mexico, Angkor Wat in Cambodia, and even the expansive ancient ruins of Rome, Machu Picchu is quite remarkable.