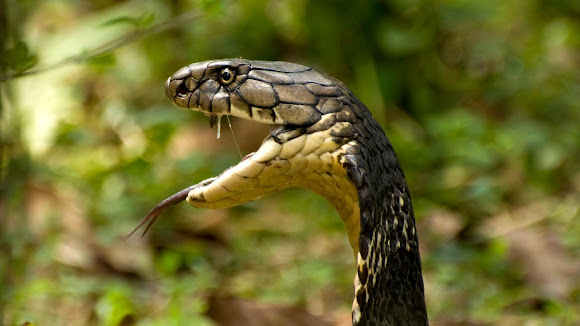 The King Cobra is the world's longest venomous snake. It mainly preys on other snakes. It is considered a very fearsome snake, though it typically avoids any confrontation with humans, if possible. When threatened, the snake can be very aggressive. In India, it is culturally very important and is worshiped in many parts.

It is found in the forests of India and Southeast Asia.

I witnessed the capture and relocation of a King Cobra. Local residents spotted the snake resting in a farm, within 20 feet of a house. The King Cobra is worshiped in these parts, the people revere this snake. I learned later that the residents waited for two days after the snake was sighted, before asking for help. Even then, they did it out of concern, they thought the snake needed medical help since it hadn't moved at all. A team of experienced snake researchers meticulously collected the snake into a bag and released it in a forest patch not too far away. On many occasions, people take the help of trained/experienced snake rescuers, who capture these snakes and release them in nearby jungles. The snakes live to see another day, but it is impossible to say that these relocated snakes survive. In a new, unknown location, with no idea of what kind of prey is available, disoriented, many snakes perish. If they do manage to find food, they need to deal with other resident snakes, who may not be too kind to their new visitor. So, the snakes are at the receiving end, always.

Cool pic I hope I find one some day

wow! what an experience!

Ramya B 8 years ago

Gorgeous!! I hope that one survived in it's new location.

Really great spotting and photos. Thanks for the description about how you saw it, what happened to it and what its future may hold in store.

Thanks for the detailed notes Radha. Glad they saved and moved the snake.

@beaker98 -- I was about 15 feet away, and this was during a snake relocation. It was a crazy moment, I had goosebumps!

@dandoucette -- I guess I was in the process of editing the spotting when you saw it first.. Posted detailed notes now :) Its not a very easy one to spot in the wild.

Great snake! Where did you see this exactly? Is it wild? Any story? I've been to Asia multiple times and have yet to spot this snake.

So how close did you have to get to this to get the photo? Crazy shot!