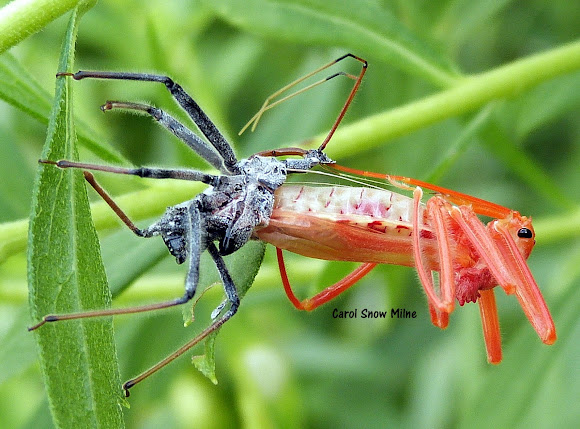 Family: Reduviidae. Nymph molting. One of the largest terrestrial bugs in North America. Length: 1.25 inches (31.75 mm). Assassin bug. Dark gray to orange at this stage. Develops cog wheel later. Long proboscis with enzymes paralyzes and dissolves soft-bodied insects such as caterpillars, Japanese beetles, stink bugs to name a few. Has scent sacs for defense. Cannalibalistic as nymphs and sometimes after mating. Does have wings but usually moves slowly in long meadows or grasses.

Meadow with abundant weeds and flowers in which to hide.

DO NOT HANDLE!! PAINFUL BITE!! (not by experience)

Thanks for your likes. This is one of my favorite spots EVER!!!