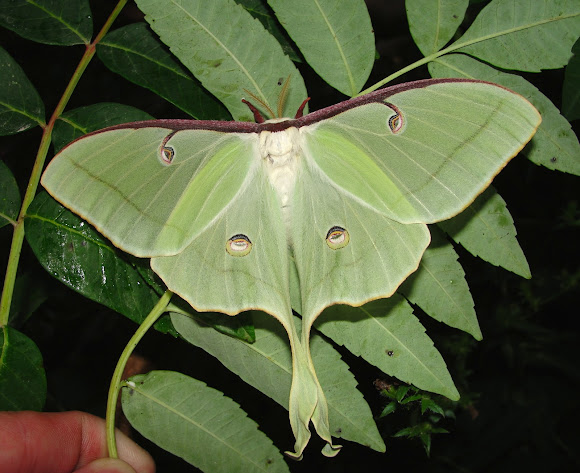 Luna Moth, is a lime-green moth, with long, tapering hindwings, which have eyespots on them in order to confuse potential predators. Nearctic Saturniid moth in the family Saturniidae, subfamily Saturniinae. It has a wingspan of up to 4.5 inches (114mm), making it one of the largest moths in North America. Based on the climate in which they live, the Luna Moths produce differing numbers of generations. In Canada and northern regions, they can live up to 7 days and will produce only one generation per year. These reach adulthood from early June to early July. In the northeastern United States around New Jersey or New York, the moths produce two generations each year. The first of these appear in April and May, and the second group can be seen approximately nine to eleven weeks later. In the southern United States, there can be as many as three generations. These are spaced every eight to ten weeks beginning in March. Each instar generally takes about five days to a week to complete. These caterpillars go through five instars before cocooning. Each instar is green, though the first two instars do have some variation in which some caterpillars will have black underlying splotches on their dorsal side. Variation after the second instar is still noticeable, but slight. The dots that run along the dorsal side of the caterpillars vary from a light yellow to a dark magenta. The final instar grows to approximately nine centimeters in length. The caterpillars feed on the following host plants: Betula (Birch), Alnus (Alder), Diospyros (Persimmon),Liquidambar (Sweetgum), Carya and Annamocarya (Hickory),Juglans (Walnut),Ipomoea alba (Moonflower), Rhus (Sumac), Solanum lycopersicum (Tomato plants). Might be more depending on area they live. Although rarely seen due to their very brief (1 week) adult lives, Luna Moths are considered common. As with all Saturniidae, the adults do not eat or have mouths. They emerge as adults solely to mate, and as such, only live approximately one week. They are more commonly seen at night.

Luna Moths were once very common, but are now considered an endangered species in some areas. Beautiful species!

I've added a photo of both male and female, enjoy!