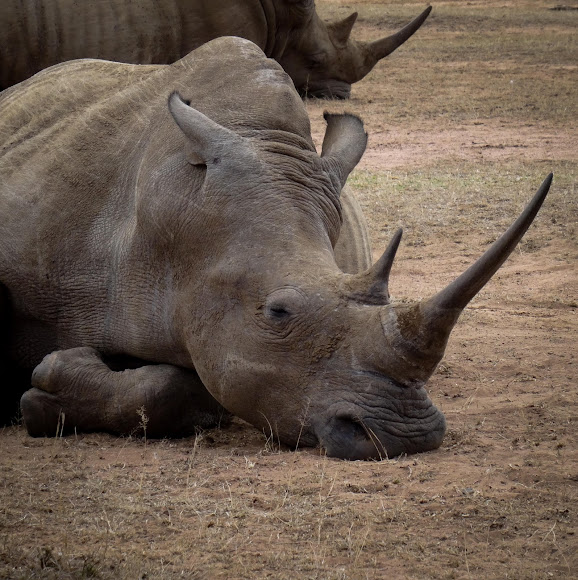 Together with the greater one-horned rhino, the white rhino is the largest of all rhino species. Its name comes from the Dutch "weit" (wide), in reference to the animal's wide muzzle. It is also known as the square-lipped rhinoceros due to its squared (not pointed) upper lip.

White rhinos appear to require thick bush cover, relatively flat terrain, water for drinking and wallowing, and short grass for grazing. They primarily inhabit grassy savanna and woodlands interspersed with grassy clearings. White rhinos are the only grazer of all rhino species, feeding almost exclusively on short grasses. The ainmals tend to avoid the heat during the day, when they rest in the shade. They are usually active in the early morning, late afternoon and evening. Females reach sexual maturity at 4-5 years of age but do not reproduce until they reach 6-7 years. In contrast, males tend not to mate until they are 10-12 years old. They can live up to 40 years. During very hot periods, the cool and rid themselves of ectoparasites (external parasites) by bathing in mud in shallow pools. Adult males can spend almost their entire life in these areas, unless water is unavailable, in which case they follow a narrow corridor to a drinking site every 3-4 days. All five of the world’s diverse species of rhinoceros have been brought to the edge of extinction because of human appetite for their distinctive horns. The horns have been prized for tens of centuries for their beautiful translucent color when carved, and their supposed healing properties. Read more here: http://www.pbs.org/wnet/nature/episodes/...

Thank you very much for the nice comments of yours Maria, Satyen and Mark! Smith Zoo, same goes for you, and if I would have knew that such mission existed I would have joined in the same time as I uploaded the spotting. Thanks for informing me!

Wow Tiz! What an amazing series and video clip!! And what a great African song to complete the mystical ora of a rhino!! I will be honored if you should add this spot to the 'Rhinos of the World' mission: http://www.projectnoah.org/missions/1284...

I have some Swedish zoo-spottings as well :) But I am lucky to work so close to a very interesting part of the world. But trust me, when I am back in Sweden I will head back to the zoo and enjoy what I see there... Obrigada Madalena :)

i love the fact that all your spottings of this kind are never from the zoo! you go Tiz :D

oh..I imagined, that is why I asked. At least in this place of the spotting things are better :-)

Ah ye, unf this was the car battery. Had to jump start it :)

The protection there is good compared to other places. They had a poacher incident there in 2011 http://rhinoclub.wordpress.com/2011/10/0.... In South Africa, and Kruger park, it is a different story... So far this year, the statistic of poached rhinos are 3 a day!!! It makes my heart cry!

I was just wondering that, Tiz! because I saw she was really fat on her sides but then I thought "Oh, well they are big animals too". This is so nice! are they protected in that area, I hope they are!
(cameras are always doing this in the worse possible moment: last year I was diving in Philippines and just when I went down and found a beautiful pigmy seahorse, the camera case flooded and byebye camera!..this is why I always say, always bring twice as many cameras as you think you will need!..and twice as many batteries as well)

I just showed the video to a man who does guided tours/safari tours in Kruger. He said that the mother is preganent again. Thank you for commenting Marta :) It was nice to be able to be so close to them, It was less nice that my car battery died on me! :) But that is a different story...

Wonderful spotting and video, Tiz! I did enjoy to see the youngster with the mother :-)