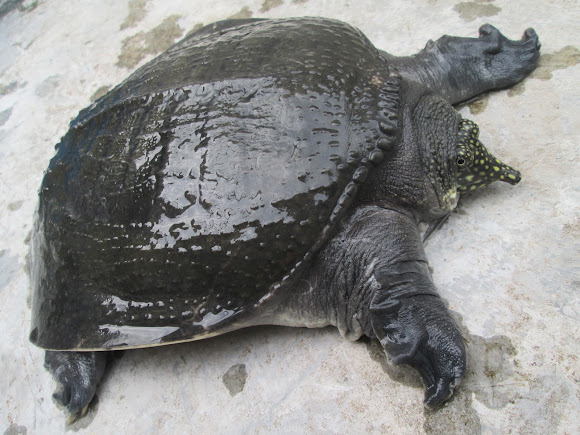 Amyda cartilaginea has a shell that grows from 70 to 80 cm (27.6 to 31.5 inches) in length.[4] The juvenile turtle's shell has a rough appearance; adults have a shell that is soft and leathery in texture. This turtle is average sized, growing to weigh between 15 kg (33 lbs) and 25 kg (55 lbs),[5] with unconfirmed reports claiming that Amyda Cartilaginea can grow to be as heavy as 105 kg (231 lbs).[5] Its carapace is oval in shape; on adult turtles its color ranges from a soft olive to green-brown. On juveniles, the carapace is dark brown or black, however this color fades with age. Yellow dots, and the occasional black spot, can be found on the shell, but these too fade as the turtle gets older. Its plastron is sexually dimorphic, appearing white in males and gray in females.[5] The head of Amyda cartilaginea can be black or brown. Its head typically displays yellow dots that sometimes appear to fuse together, creating elongated streaks. As the turtle ages, its nape region becomes white or gray.[4] A trait that helps differentiate the Asiatic soft-shell turtle from other similar species is its noticeably elongated snout. This is an adaptation that, coupled with its great flexibility, aids the turtle in breathing when it has buried itself.[5] Increased gas exchange, a result of an adaptation known as "pharyngel breathing", allows the Asiatic soft-shell turtle to remain submerged in water for extended periods of time.[4] Amyda cartilaginea has several permanent tubercles on its neck;[4] these tubercles can appear yellow or black. The Asiatic soft-shell turtle's limbs also have yellow spots, but these are usually less in quantity and difficult to distinguish. Its feet are wide and flat, resembling paddles. As a final descriptive note, the males have longer and thicker tails than females

Amyda cartilaginea can be found in tropical regions, freshwater habitats, rainforest terrestrial biomes, in the aquatic biomes of lakes, ponds, canals and lowland streams. It can be found in many locations throughout Asia, specifically in the following countries: Brunei, Bangladesh, Borneo, Cambodia, India, Indonesia, Laos, Malaysia, Myanmar,[4] Sabah,[6] Sarawak, Singapore, Thailand, and Vietnam.[7] Amyda cartilaginea tends to favor wetlands; the Asiatic soft-shell can be found in marshes, swamps, and sizeable muddy rivers at lower elevations

While turtles can be amphibious, they are not amphibians. They belong to the group of animals known as reptiles.