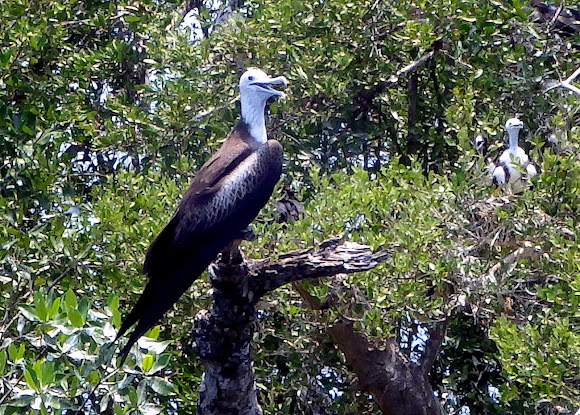 Spotted on a small mangrove island rookery in Belize. The only other bird spotted on the small island was the brown booby (Sula leucogaster). There were easily hundreds of these birds packed onto this tiny little island. It was quite a site!

Mainly in coastal waters (sometimes inland over large bodies of water or in association with storms); generally within sight of land when offshore. Roosts on rocks, vegetation of offshore islands, and on rigging of boats. Nests on islands in mangroves, low trees, and shrubs; usually on steep slope of offshore island. Sensitive to disturbance; usually nests on most remote cays and islets.

This bird was sometimes previously known as man o'war or man of war, reflecting its rakish lines, speed, and aerial piracy of other birds. This species feeds mainly on fish, and attacks other seabirds to force them to disgorge their meals. Frigatebirds never land on water, and always take their food items in flight.

Yeah, unfortunately I did not get the GPS coordinates of many of the sites I visited in Belize, and the Map Search rarely picks up on those small islands. I think the location is pretty close now.

I was confused by the map

Karen, it was offshore. I posted a photo of the actual island they were on.

Just out of curiousity - were these off shore or was the island inland?