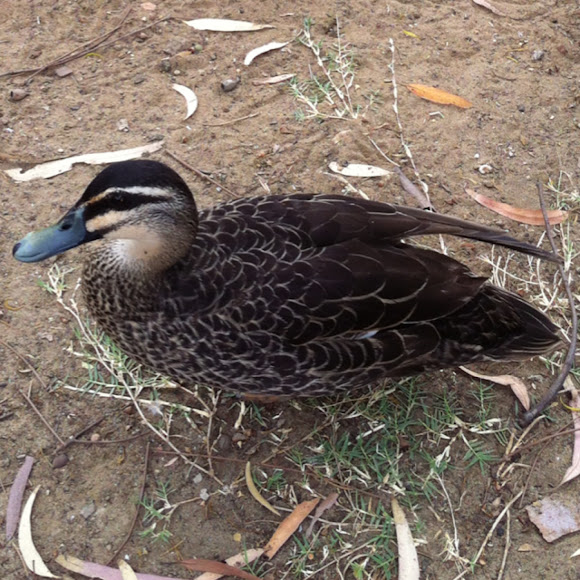 Description: The Pacific Black Duck is mostly mid-brown in colour, with each feather edged buff. The head pattern is characteristic, with a dark brown line through the eye, bordered with cream above and below and a dark brown crown. The upper wing colour is the same as the back, with a bright glossy green patch in the secondary flight feathers. The white underwing is conspicuous in flight. Young Pacific Black Ducks are similar to the adults in plumage. Size Range: 50 - 60 cm long

Feeding and Diet: This duck is mainly vegetarian, feeding on seeds of aquatic plants. This diet is supplemented with small crustaceans, molluscs and aquatic insects. Food is obtained by 'dabbling', where the bird plunges its head and neck underwater and upends, raising its rear end vertically out of the water. Occasionally, food is sought on land in damp grassy areas. Breeding: Mating in Pacific Black Ducks coincides with availability of sufficient food and water, and often with the onset of heavy rains or when waterways are at their peaks. Courtship is accompanied by ritualised displays including preening, bobbing and wing-flapping. This behaviour is often initiated by the female, and, other than copulation, the male helps little in the breeding process. Often, two broods will be raised in a year. The number of offspring produced may seem quite high, but only 20% of these will survive past two years of age. Other Behaviours and Adaptations: The Pacific Black Duck is closely related to the Mallard, A. platyrhynchos, introduced into Australia from the Northern Hemisphere. The two species are very similar in habits and occupy the same niche in the two regions. The two species will interbreed in situations where Mallards have been released. I came across these ducks in an area of Grange South Australia, known as The Old Port Reach. It is a creek lined with trees and water reeds. The first picture is a male and a female in the second picture. Information came from these website: http://australianmuseum.net.au/Pacific-B... http://www.birdsinbackyards.net/species/...