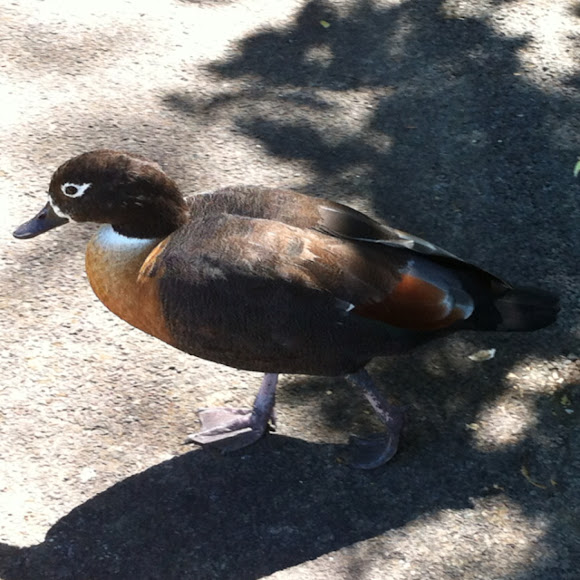 Identification: The Australian Shelduck is a large, brightly coloured duck with a small head and bill. The male head and neck are black, tinged green, with a white neck ring and occasionally a white ring around the base of the bill. The upper parts are mainly black, while the underparts are dark brown with a cinnamon breast. White upperwing coverts form a white shoulder patch. The wings are black and deep chestnut with a large green speculum (window in wing). The female has a white eye-ring and a chestnut breast. Australian Shelducks are usually unmistakable, with the upright stance and dark head contrasting with the white neck ring. Size Range: 56 cm to 72 cm

Seasonality: After breeding some migrate long distances to particular large wetlands such as Lake George, Australian Captial Territory, and the Coorong, South Australia, to moult flight and tail feathers. Feeding and Diet: The Australian Shelduck grazes on green grass on land or in shallow water. It also eats algae, insects and molluscs. Communication: A loud honking, deeper and more grunted from the male, higher and more resonant from the female, 'ong ank, ong ank'. Mating and Reproduction: The nest of the Australian Shelduck is usually in a large tree hollow, well lined with down. They have also been known to breed in rabbit burrows and in large hollows on cliff faces . Flightless downy young may gather in creches. Only the female Australian Shelduck incubates the eggs, while the male defends the brood territory. This species is monogamous and some birds are known to create permanent pair-bonds. Breeding season July to December Clutch size: Ten to fourteen. Incubation: 33 days Conservation Status: The clearing and conversion of some areas to cropland and pasture has led to an increase in some local populations of the Australian Shelduck. Breeding territories are often established around farm dams. Came across this male at the Warrnambool Botanic Gardens in Victoria Australia. He was also very cranky! Did his best to chase me and my family away from our pick nick lunch. Information came from this website: http://australianmuseum.net.au/Australia...