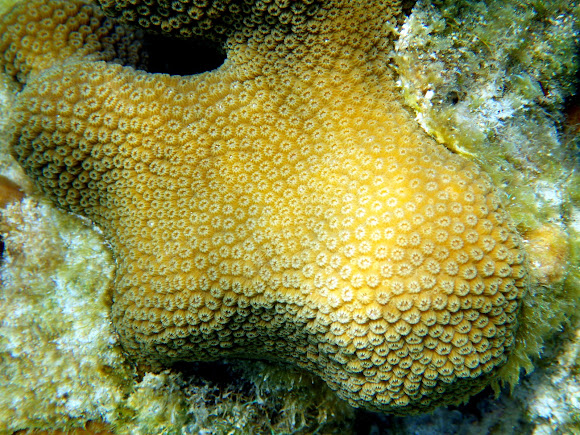 Spotted in the Caribbean off of the Belizean Coast. The only species within the genus Porites not to have a finger-like form. The corallites are small and tightly-packed and give the coral a porous appearance. Most commonly yellow to yellow-green or yellow-brown, occasionally beige to gray. Polyps usually extended, giving the colonies a soft, fuzzy appearance.

This species is found in all reef and near-reef environments. Dominates on the shallow exposed fore reef where other massive species are rare, and it is found on the deep reef and in the back reef; depths range from 0.2-70 m, with the highest abundance from 1-15 m. Also present in subtidal rocky environments and seagrass beds. They commonly inhabit disturbed reef surfaces (and are often the first to recolonize areas following disturbance), and are also common in areas of high sedimentation and high turbidity.