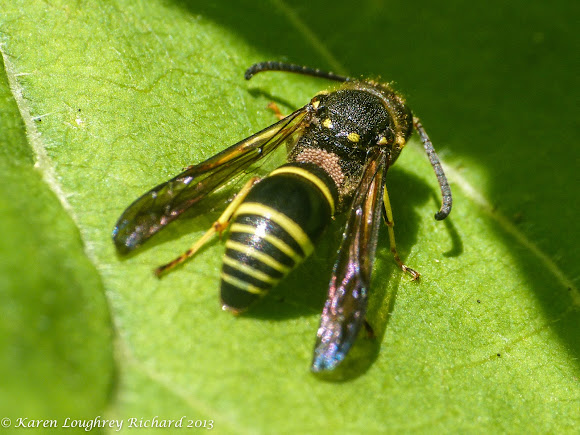 Small wasp with a large number of phoretic mites hitchhiking on a structured called the Acarinaria, a special structure on the body of bees and wasps that function exclusively to harbor mites. They may be a hollow chamber, a hairless area that is easy for mites to cling to, or a series of pits along the edge of an abdominal segment. Evolving modified body parts to accommodate mites makes sense so long as the mites are beneficial. It’s presumed that the mites perform a service in the nest prior to them feeding on the wasp, such as combating fungi, predators, or parasites that might damage wasp eggs or young. Each genus of wasp is associated with a particular genus of mite, so this relationship is very specialized. Yet the precise mechanism of this mutualism is still poorly understood.

The mites on the wasp are benign – they are in a non-feeding phase while on board. If the mites are on a male wasp, they transfer to the female when the wasps mate. Potter and mason wasps are not social wasps; each female constructs a separate nest made of mud, in the ground, in wood, or some other cavity. As the female provisions her nest, the mites disembark. There they continue to develop, and once the immature wasp pupates, the adult mites feed on the young wasp. Amazingly, this apparently does not harm the wasp. A new generation of mites hitches a ride out of the nest on the wasp when it emerges.

Thank you John for the correction & all of the really fascinating supporting links. Thank you for your comment KarenP.

Karen
Very very cool picture (although this is a wasp in the family Vespidae and not a bee).
But to get back to why it is so cool - the "eggs" on the wasp inn picture 4 are actually phoretic mites.
Here are a couple of other pictures of this phenomenon
http://www.ispot.org.uk/node/275881
http://blog.audubonguides.com/2011/08/03...
See also discussion of phoresy at
http://en.wikipedia.org/wiki/Commensalis...
and also Acarinarium - which is a specialised structure to carry mites
http://en.wikipedia.org/wiki/Acarinarium...