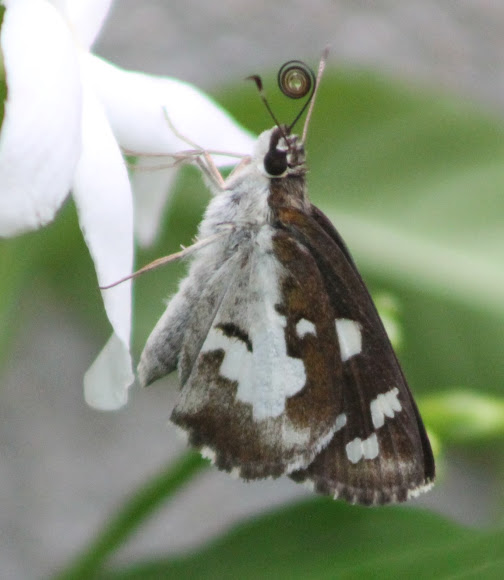 The sexes are alike. The upper side is dark brown. It has scattered white patches on the forewing which are smaller in the distal parts than in the basal part. The hindwing has a large white patch on the center. The underside is dark reddish-brown which is somewhat obscured by the pure white scales that cover most of the hindwing. The margin of this white scaling continues up to its snout along the thorax and eye in the form of a straight line. The forewing is also slightly washed with white scales interior to the sub-margin. The white patches are the same as on the upper side. The dorsal area of its abdomen, thorax, and head are dark brown.

It has quite a rapid flight but is distinct due to its pied coloration. When it settles, its wings appear to rotate around a hinge at its thorax. It is active at dawn and dusk and in gloomy conditions. It feeds on the nectar of flowers that have long corolla tubes such as Tabernaemontana divaricata which are inaccessible to other species. While it was considered a very rare butterfly in the 1950s, it is now commonly seen around home gardens.