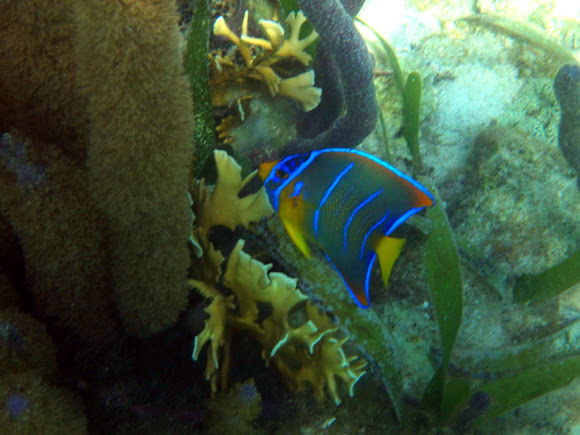 Beautiful fish that fortunately are not terribly afraid of divers, so they were easy to chase around :)

Queen angelfish are primarily found in coral reefs, which provide shelter and abundant food sources. They can be found at depths up to 70 m. Although they are naturally marine fish, queen angelfish can tolerate changes in salinity.

Queen angelfish are popular additions to saltwater aquariums because of their beautiful coloration as both juveniles and adults. Because new technologies have allowed hobbyists to effectively care for and keep marine fish, queen angelfish are increasing sought after. In Florida, queen angelfish averaged from $11.16 to $17.84 USD per fish between 1990 and 1998. Retail prices vary with size and range between $60 and $130 USD. Queen angelfish are considered a species of least concern by the ICUN. Populations are globally stable, although they are harvested in high numbers near Brazil.