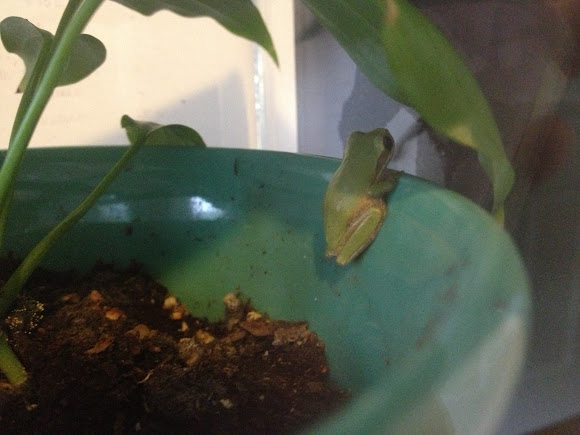 I think he's a green tree frog, but they're not native to where I live in Louisville, KY...he's solid green on top, with a gold band that runs from his eyes on down, gold edging around his back legs, his belly is white, almost translucent. He has black eyes with a gold circle around the edge, I think they go completely black at night...

I went on vacation to the Outer Banks, NC 3 weeks ago. I found him inside my car 2 days ago...is it possible he has lived inside my car for 3 weeks? Or did someone release a pet? He's quite small, I'm assuming still young. I don't think anyone would release such a young pet, they're usually older when they tire of them. Or have they moved to KY because of climate changes?

Typo noticed: I used a clear plastic bin, so the light would attract flies and so I could watch him. It would probably be easier to go to a local pet store and get an aquarium and other frog supplies, etc. I think u can feed them crickets and use a screen lid. If you drill up a plastic bin, make sure to smooth out the rough cuts on the inside, because he may jump into them and cut himself catching flying insects.

It's a squirrel tree frog. I just had the same thing happen to me. We found it in the car, or actually he was jumping around on our drive home, while in nj. I put him in a cup, so he would be safe for the last leg of the drive. He must have been hiding in one of our beach chairs and came out when it got dark, as they are nocturnal. Unfortunately, here in nj, he is far from his native habitat. Currently, I drilled holes a ton of holes in a clar plastic bin, lid and upper sides. Used a scraper to smooth them, to prevent them from cutting him. I used a bit just big enough to let flies in, needed to be pretty large, but just small enough that he couldn't get out. At night, I put a led flash light inside, which draws in flies and I watch him eat them. I leave him some filtered water in the bottom. Chlorine in untreated tap water isn't good for them. I will probably make a surf trip back down there this fall to return him. Amphibian numbers are steadily declining, so I would prefer to give him a chance in his native habitat/ back where he came from. Lesson learned: remove tree frogs from outside stuff before I pack it. Pretty neat to watch him eat flies at night though.

Now that I've done more research I believe he is a squirrel tree frog, still not native to my area, but very common where I was vacationing (OBX, NC) If anyone out there can identify him I would greatly appreciate it! Thx!!