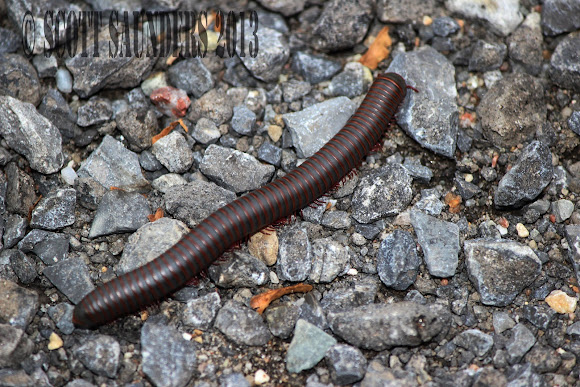 Narceus americanus is a large North American millipede. It inhabits the eastern seaboard of North America west to Georgetown, Texas, north of the Ottine swamps.[1] It has a nearly cylindrical gray body, reaching a length of 4 inches (100 mm).[2] When threatened, they sometimes curl up or release a noxious liquid that contains large amounts of benzoquinones which can cause dermatological burns. This fluid may irritate eyes or skin. Many other millipedes secrete hydrogen cyanide, and while there have also been claims that N. americanus releases hydrogen cyanide, this is not true. They do however, excrete a substance that causes a temporary, non-harmful discoloration of the skin.