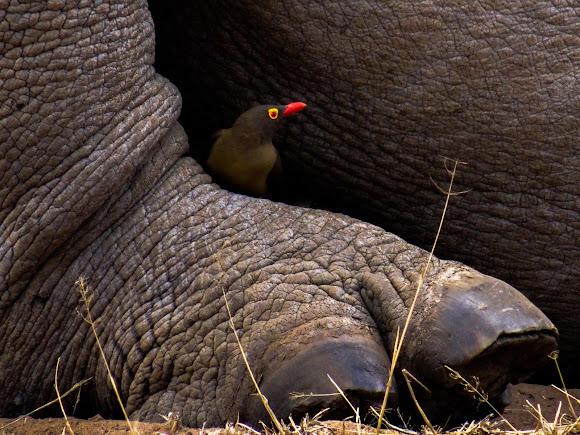 Red-billed oxpeckers: vampires or tickbirds? These small birds feed almost exclusively on what they can glean from the skin of large African mammals. Their diet includes ixodid ticks, dead skin, mucus, saliva, sweat and tears, but most of all, the prefer blood! I found one "caught in action", drinking blood from a wound by the tail... The Red-Billed Oxpecker belong to the starling and myna family.

On White Rhinos close to a waterhole.

Their preferred food is blood, and while they may take ticks bloated with blood, they also feed on it directly, pecking at the mammal's wounds to keep them open to more parasites. Oxpecker/mammal interactions are the subject of some debate and ongoing research. They were originally thought to be an example of mutualism, but recent evidence suggests that oxpeckers may be parasites instead. (read more here http://beheco.oxfordjournals.org/content...) Photo taken at Hlane Royal National Park, Swaziland

Dear Daniele, this is great news and I am deeply thankful that the photo could support the theme.
I am alive and kicking, even if my camera is collecting dust home in Sweden.
I am Currently working in South Sudan, a very rich country when it comes to wildlife, but regime restriction on cameras and a big governmental fear for reporters and photographers.

One day though, I hope that the nature reserves here can be re-opened and tourism allowed...

We hope you're well Tina! What an amazing series of shots, with great information about these oxpeckers. Congratulations, we've chosen this spotting to illustrate our 2019 Beast Wildlife Photo mission with a special theme on interactions between species:

"We're launching our 2019 Best Wildlife Photo competition, with a special theme: interactions between species. Following our Habitat theme last year, this year we wish to bring attention to the “N” in Noah (Networked organisms and habitats), and we want our members to emphasize species interactions. We've all heard of the Web of Life: ecosystems are made up of living organisms and non-living matter, where all life forms depend on all the other elements for continued survival. Whether it’s symbiotic relationships, predation, food supply, pollinators in action or any other type of interaction, show it in your shots and notes.
To enter the competition join this mission and add it in your spottings: https://buff.ly/2WIJPd8
Winners of our 2018 competition will be announced throughout February".

Joined! I am happy to suppot you in any way I can! Keep that spirit, you are doing a fantastic work :)

Wow Tiz! I missed this spot!!! Stunning! I see you have already added it to 5 missions, but you are welcome to add it the Rhinos of the World mission if you wanted to!

This is a great shot!

Thank you both Rubens and Johan, for your dear comments :)
Johan, an open, bleeding wound is harder for bacteria to thrive in. But it might be that the birds contribute to some kind of antibacterial process as well. It will be interesting to follow the research in this "collaboration relationship".

I like the fact that you cropped the photos to concentrate on the subject. I'm of the opinion that the relationship is beneficial because the bird keep the wounds open which prevents festering. Almost like a nurse tending to a wound.

Then you are a fan of a fan! That must be the best combo there is :)

But nature is clever, there is for sure more to gain from this mutual relationship than there is to loose.

No they let them climb around quite undisturbed. The smallest mammals they "clean" are the Impala, and they could easily get rid of them if they wanted to. When it comes to the rhinos, they did became a bit irritated every now and then, but the reaction was more like a fly on a horse... They one sitting by the wound were brushed away by the tail once, but came back. They were also flying into the ears, and they were allowed to be in there for a few seconds before they moved the ear to get rid of it... I understand that there must be a lot of energy they gain from the body liquids, especially blood.

As you can see I am intrigued!

Maybe they keep the animal wounds free of fly larvae?

It is hard to believe they would be so vicious to their host and the poor things can't get rid of them. Do the mammals exhibit fear or attempt to avoid the birds? You know like how horses run from Tabanids?

This is really neat Tina. These birds are actually opportunistic and the blood thing is actually common, even in insects. If it's there and liquid then it's a good source of food. Beautiful pictures and information!

not like the cattle egret, I suppose,which is beneficial.

Amazing feedback from you Gilma Jeannette Ospino Ferreira-Norman! Living creatures are not always at pretty as they look... I hope you have found some more interesting information :)
Best regards Tina

Thank you so much for posting those beautiful pictures and arising my curiosity, Tiz.
Hard to believed...it is easy to see why it is the subject of debate...I will read some more about it before I believe a bird would keep it's host wound open to feed and that it also feeds on blood. : o

I am happy you liked the spotting :) This bird is not as nice as it looks!!

Perfect one, amazing birds thanks for sharing :)