Oulactis Anemone (with eggs or polyps?) 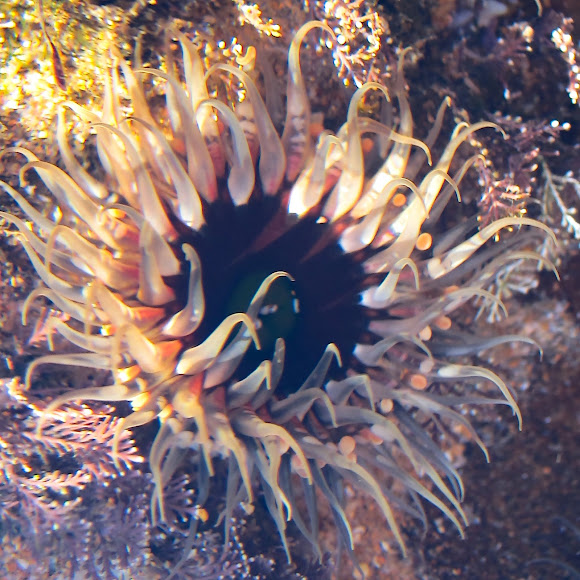 The amazing Oulactis Anemone, also commonly known as Sand Anemone and Speckled Anemone, loves to cover itself with sand and shell-grit. This species belongs in the family Actiniidae, and all anemones in the order Actiniaria. It appears that this specimen is ready to reproduce, so are these small, yellow-orange structures eggs or polyps? Or perhaps they have been produced by another type of organism and captured by this anemone? Quoting from the reference link: "Sea anemones breed by liberating sperm and eggs through the mouth into the sea. The resulting fertilized eggs develop into planula larvae which, after being planktonic for a while, settle on the seabed and develop directly into juvenile polyps. Sea anemones also breed asexually, by breaking in half or into smaller pieces which regenerate into polyps." The second image shows these objects clearly, and I doubt they would be mere shell-grit simply because of the uniformity of size and colour, plus the smooth, spherical structure of each. They certainly appear to be organic, but I welcome your thoughts.

Freshly flushed ocean rock pools at North Avoca Beach. This species of anemone can be found in South Australia, Tasmania, NSW and southern Queensland, and also in New Zealand.

I didn't notice these small objects at the time, but spotted them whilst viewing this photo on my computer. It's the only photo I took of this specimen and it's not the best quality image, but it will have to do.

Yes Neil. Most look whitish. I read that Oulactis species also have fighting tentacles. anyway, it's ll be great to find out, wouldn't it. Thanks.

Leuba, like these? - https://commons.wikimedia.org/wiki/File:... Maybe. That's a reasonable explanation. A better photo with clarity would help. Anyway, let's see what comes back. I enjoy the mystery :)

Wear those fishy specs for a day and you'd have no friends. Except for cats. You'd be followed by lots of cats.

Thanks for your response Neil. We'll await expert opinion. I personally think they are acrorhagi -which are fighting tentacles. One of their functions is to deter other anemones from settling to close to them. You can see a couple here
https://collections.museumvictoria.com.a...
Sorry about my persistence but this class of marine creatures are my favourite.

The orange ball shapes. No mucking around - I've just sent an email to the fish person at Newcastle University.

I get nervous when a nurse says 'polyps'.

Neil are you talking about those orange ball shapes or the white bits inside the clear tentacles?

Thanks, Leuba. I was very lucky to spot these, but I have delved a little bit deeper and have read a couple of research articles (not that I understand all their specialised language), and viewed several videos. Rather than eggs, I think I have spotted polyps. These are large when compared to the eggs I have seen on the videos. I'll share this spotting with my niece who is a diver, and is very interested in marine life. She may know, or at least can share it with those who do.

I just happened to see this spotting cross referenced in a recent spotting of Oulactis sp. and wondered if the structures you refer to as eggs are the pale structures within the tentacles. Never seen them contained. Certainly a lucky find if they are eggs.

I can't see my camera at the best of times (thank God for the auto setting), so the best discoveries are made at home. Yes, it's great :-)

Ha! Mini nightmare. The 'black hole' of the shorelines to small critters. Isn't it great when you find stuff n pics later.