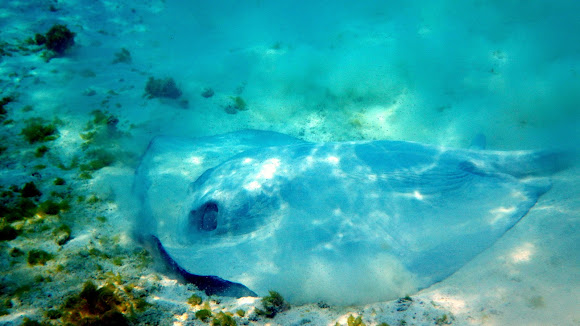 This was my first stingray encounter and it was incredible. This individual was spotted while snorkeling around Wee Wee Caye near Belize. The water was shallow enough to stand in. It has a flat, diamond-shaped disc, with a mud brown, olive, and grey dorsal surface and white underbelly (ventral surface).3 The barb on its tail is serrated and covered in a venomous mucous, used for self-defense.

Found on sandy bottoms, seagrass beds, lagoons and the reef face. Common in bays and estuaries. Observed singly, in pairs and in aggregations. Buries in the sand during the day and forages at night, usually in seagrass beds