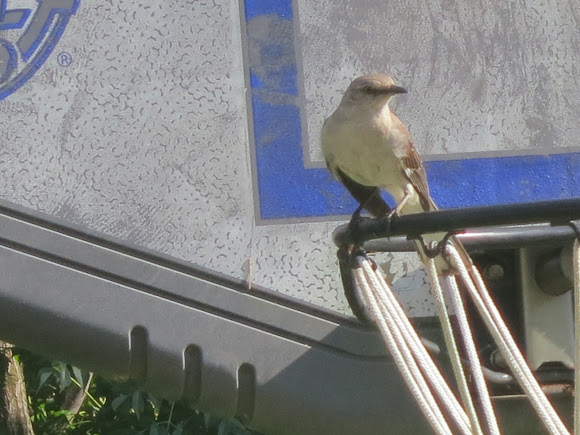 A medium size song bird. They have a white breast and belly,with two white wingbars on each wing and a black eyeline through their eyes. The white patch in each wing is often visible on perched birds, and in flight these become more visible. They are quite territorial and will aggressively chase away any intruder in their territory. It usually sits conspicuously on high vegetation, eaves, or telephone wires, runs and hops along the ground and fences. They are slightly larger than the Catbird

In the nineteen century, people love mockingbird's singing so much, they capture and lock them in the cages. The male mockingbirds can learn about 200 songs throughout their lifetime. They often sing often at night and throughout the day. They eat beetles, earthworms, moths, butterflies, ants, bees, wasps, grasshoppers, small lizards, fruits from multiflora rose and even drinking sap from the cuts on recently pruned trees.