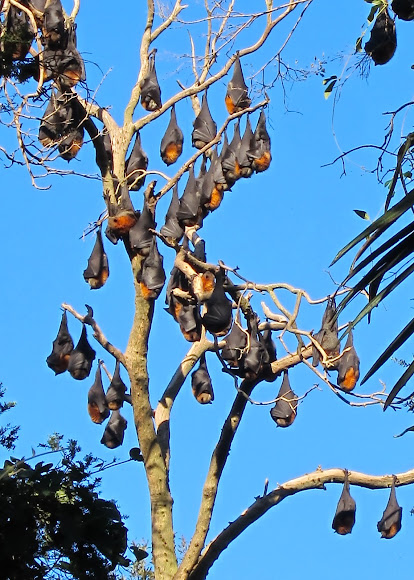 My original spotting of this colony was in Feb 2012 - http://www.projectnoah.org/spottings/228... ...and 18 months later, it has grown considerably. What was once a small colony with a population in its hundreds is now in its thousands. Hard to do a head count though. The foliage was very dense so it was difficult to approach quietly, and as the older bats are usually roosting at the perimeter the colony, they raise the alarm and tend to fly. Distant shots will have to do as I just couldn't get close enough without spooking them, or to get a decent vantage point that wasn't obstructed by trees. The noise was unbelievable and so was the smell. Heaven help the neighbours, but this is Australia so if you don't like it... move to an apartment complex in the city.

Roosting in Casuarina trees and other natives, in a large colony at North Avoca on the NSW Central Coast.

In NSW, this species was listed as vulnerable under the Threatened Species Conservation Act 1995. Several colonies suffered major losses earlier this year due to heat stroke. Many bats died, particularly the young ones which are most vulnerable to hot conditions. Some were rescued, but not all. Flying Foxes are protected by law, as is all native fauna, but that doesn't mean people obey the law. Some idiot took pot shots at this colony some time ago and that just spooks them, and if they kill the adults at the edge of the colony, there's no one to teach the young how to be bats. Very sad. I'm delighted to see this colony thriving. I've seen some enormous Flying Foxes. One lived outside a friend's place in Sydney, in a giant eucalypt, and it would shake the tree and then drop from it to take flight. Terrifying when it's dark and you can't see whats whooshing towards you. Raised a few pulses, I can assure you.

Thanks folks. I'll be down that way later in the year so will try to approach this colony from a different angle, hopefully from the lake. That might give me an opportunity to get some better photos.

Great series, Neil Ross, it is wonderful to know they are thriving there even though they are in the vulnerable list under the Threatened Species Conservation Act 1995.
Perhaps it is changing and that would be fantastic.

awesome!!! i just told a friend at work that they are as large as the turkey vultures i was just posting. she is happy she is canadian. personally I would love to see them close up. thanks for the shot.