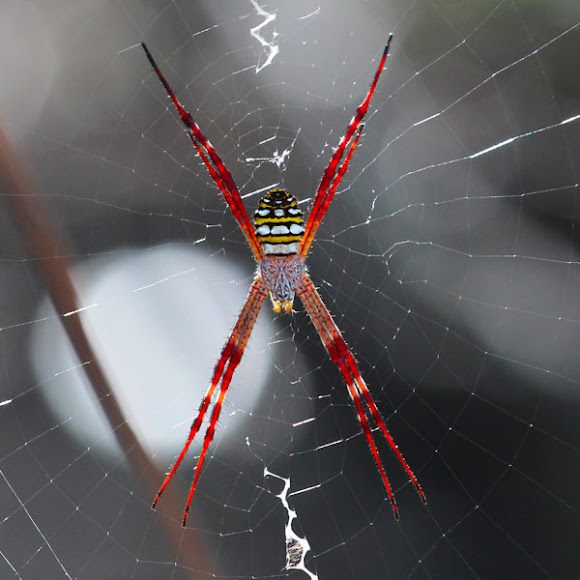 A large, very colourful female with red legs and a vividly-striped yellow, white and black abdomen. Rests in a cross shape.

Seen on the banks of the Upper Noosa River. The web was strung out above the water between some branches, about 1.5 metres above the surface of the river.

We almost drifted into this web in our kayak while I was taking pictures of the lace monitor in my previous spotting. My husband was a bit disgusted that I was more excited about this spider than the lace monitor, but I had never seen one of these before. I believe it is a Northern St Andrews Cross spider, a close relative of the very common St Andrews Cross Spider (A. keyserlingi) but much less common and supposedly occurring through 'tropical areas of Queensland'. This must be pretty close to the southern limit of its range, although Atlas of Living Australia shows a couple of sightings on the south-east coast. Unlike the A. keyserlingi, which constructs a cross-shaped stabilimentum in the web, this species generally constructs a vertical stabilimentum instead (see second shot).

Great spotting Shanna, with a nice story. It's funny how small things make us smile.