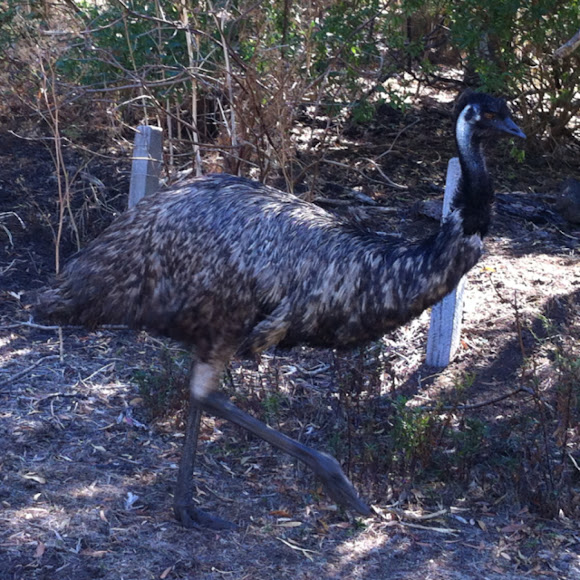 Identification: The Emu is Australia's tallest native bird, reaching between 1.6 m and 1.9 m when standing erect. Adult Emus are covered with shaggy grey-brown feathers except for the neck and head, which are largely naked and bluish-black. The wings are greatly reduced, but the legs are long and powerful. Each foot has three forward-facing toes and no hind toe. Most people see Emus along roadsides, near fences or other barriers, giving the impression of close association. However, Emus are not really social, except for young birds, which stay with their father. Size Range: 160 cm to 200 cm

Habitat: The main habitats of the Emu are sclerophyll forest and savanna woodland. These birds are rarely found in rainforest or very arid areas. Distribution: The Emu is found only in Australia. It lives throughout most of the continent, ranging from coastal regions to high in the Snowy Mountains. Emus were once found in Tasmania, but were exterminated soon after Europeans arrived. Two dwarf species of emus that lived on Kangaroo Island and King Island also became extinct.

Similar Species: Southern Cassowary Seasonality: Emus move within their range according to climatic conditions. If sufficient food and water are present, birds will reside in one area. Where these resources are more variable, Emus move as needed to find suitable conditions. They are known to move hundreds of kilometres, sometimes at rates of 15 km to 25 km per day. Feeding and Diet: Emus eat fruits, seeds, growing shoots of plants, insects, other small animals, and animal droppings. Communication: Booming, drumming and grunting. Booming is created in an inflatable neck sac, and can be heard up to 2 km away. Mating and Reproduction: Nesting takes place in winter. The male and female remain together for about five months, which includes courtship, nest building and egg-laying. The nest consists of a platform of grass on the ground, about 10 cm thick and 1 m - 2 m in diameter. The large eggs (130 mm x 90 mm) are laid at intervals of two to four days. These are dark bluish-green when fresh, becoming lighter with exposure to the sun. The shells are thick, with paler green and white layers under the dark outer layer. The female dominates the male during pair formation but once incubation begins, the male becomes aggressive to other Emus, including his mate. The female wanders away and leaves the male to perform all the incubation. Sometimes she will find another mate and breed again. The male incubates the eggs without drinking, feeding, defecating or leaving the nest. During this time, eggs often roll out of the nest and are pulled back in by the male. Newly hatched chicks are cream-coloured with dark brown stripes. They leave the nest when they are able to feed themselves. Young birds stay close together and remain with the male for four months. They finally leave at about six months. During this period, the stripes fade and the downy plumage is replaced by dull brown feathers. Emus are nearly fully grown at one year, and may breed at 20 months. Sometimes eggs that have not hatched remain in the nest after the male and young have left and become sun-bleached. Bleaching takes about three months. Breeding season: April to June Clutch size: 5 to 15 Incubation: 55 days Time in nest: 7 days Economic/Social Impacts: The first specimen collected in 1788 by Europeans was from what is now an inner suburb of Sydney: Redfern. Today, Emus are absent from heavily populated regions, especially along the east coast. Despite this loss in some areas, Emu numbers may have increased since European settlement. The provision of water for domestic stock, together with the Emu's ability to reproduce rapidly, has favoured its survival. Emu farming has been tried for several decades but recently interest has been growing in this industry. A pair of Emus may produce ten eggs a year under good captive conditions, which yield on average 5.5 chicks. At the end of 15 months, these would yield 4 square metres of leather, 150 kg of meat, 5.5 kg of feathers, and 2.7 litres of oil. Eggshells of infertile eggs have been used for carving. Sighted this male (male because of the blue skin going up the neck to the head around the ear hole) in Tower Hill Wildlife Reserve in Victoria Australia. Information came from this website: http://australianmuseum.net.au/Emu/