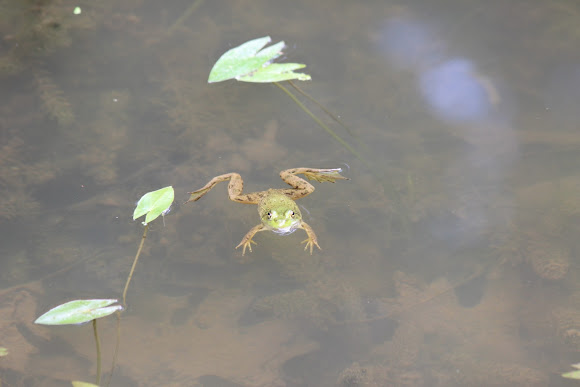 The dorsal surface of the bullfrog has an olive-green basal color, either plain or with a mottling and banding of grayish-brown. The ventral surface is off-white blotched with yellow or gray. There is often a marked contrast in color between the green upper lip and the pale lower lip. The eyes are prominent with brown irises and horizontal almond-shaped pupils. The tympani (eardrums) are easily seen and the dorsolateral folds of skin end close to them. The limbs are blotched or banded with gray. The forelegs are short and sturdy and the hind legs long. The hands are not webbed, but the feet have webbing between the digits with the exception of the fourth toe.[10] Bullfrogs are dimorphic, with males being smaller than females and having yellow throats. Males have tympani larger than their eyes, whereas the tympani in females are about the same size as the eyes.[10] Bullfrogs measure about 3.6 to 6 in (9 to 15 cm) from snout to vent. They grow fast in the first eight months of life, typically increasing in weight from 5 to 175 g (0.18 to 6.2 oz),[11] and large mature individuals can weigh up to 500 g (1.1 lb).[12] Exceptional bullfrogs can possibly attain 800 g (1.8 lb) and measure up to 8 in (20 cm) in length

The bullfrog is native to the eastern half of the United States. Its natural range extends from the Atlantic Coast to as far west as Oklahoma and Kansas. It is not found on offshore islands near Cape Cod and is largely absent from Florida, Texas, Colorado, Nebraska, South Dakota, and Minnesota.[14] It has been introduced into Massachusetts, Arizona, Utah, other parts of Colorado and Nebraska, Nevada, California, Oregon, Washington, and Hawaii. In these states, it is considered to be an invasive species and there is concern that it may outcompete native species of amphibians and upset the ecological balance.[14] It is very common in California, where it is believed to pose a threat to the California red-legged frog and is considered to be a factor in the decline of that vulnerable species.[15] Other countries into which the bullfrog has been introduced include Mexico, the western half of Canada, Cuba, Jamaica, Italy, the Netherlands, and France.[16] It is also found in Argentina, Brazil, Uruguay, Venezuela, Colombia, China and Japan.[17] The reasons for introducing the bullfrog to these countries have included their intentional release, either to provide a source of food or as biological control agents, the escape of frogs from breeding establishments, and the escape or release of frogs kept as pets.[16] Conservationists are concerned the bullfrog is relatively immune to the fungal infection chytridiomycosis and as it invades new territories, it may assist the spread of this lethal disease to more susceptible native species of frog.[17]