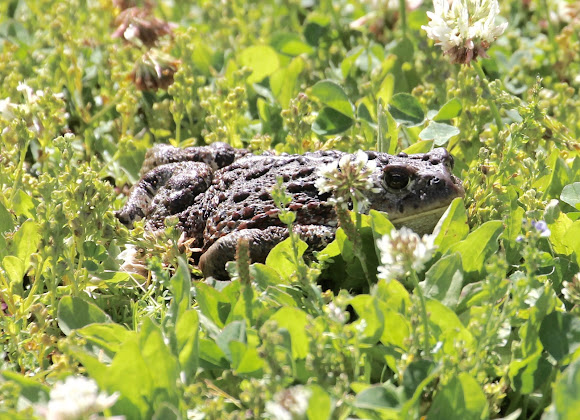 Very similar to the American Toad which occurs from the Rockies eastward across Canada and the US but the Western has a light streak down its back. Note the oval parotid glands which is diagnostic for this species of toad! The naturalist at the campground called this an American Toad but I was able to find more information once I got within reach of wifi to see that it is out of range for an American Toad and also has the wrong characteristics. Thanks wifi!

In BC the Western Toad is found only in mountain meadows. This one was in the clover and grass beside Lightning Lake and he was very still for a long time. I was glad that he moved eventually! Westerns Toads occur along the west coast from southern Alaska to northern Baja California in suitable habitat.

Wiki has the following sad note about this species: The western toad is a species occupying a variety of habitats, but is listed as near threatened largely due to the impact of disease and chemical contamination of the environment, especially chytridiomycosis.[1] One of the chief chemical threats is the overuse of the fertilizer urea, which is often applied in high dosage to forest environments to increase biomass productivity and economic return. A. boreas is harmed by the dermal absorption of this chemical, which can lead to increased mortality.[20]