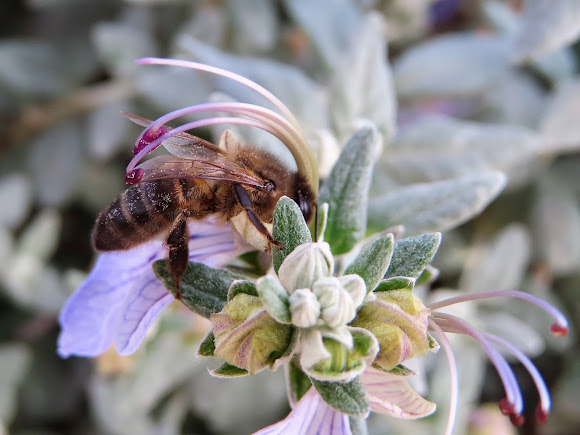 It is a dark brown insect, approximately 1.5 centimeters in size for the workers, and 2 centimeters for the queen and males. On the head there are two lateral eyes composed of numerous facets and three bright points at the top, which are the simple eyes (ocelli). The mouth is of the licking type. The third pair of legs has baskets in the workers to transport the pollen. The abdomen is visibly segmented, and the females have a poisonous stinger in the last ring, which remains fixed in the wound it produces, so that the mutilated insect ends up dying.

Feeding on the nectar of bitter sage, Teucrium fruticans, from a public garden.

It lives in colonies, each of which consists of a single fertile female, several males, and a large number of sterile females; it lives in the hollows of trees or rocks, or in the hives that humans prepare for it, and produces wax and honey. The European bee (Apis mellifera), is known for the benefits of its products (honey, pollen, wax, etc.), the result of its breeding since time immemorial, believing that honey was the first substance that man used to sweeten his foods, in addition to playing an important environmental role as pollinating agents.